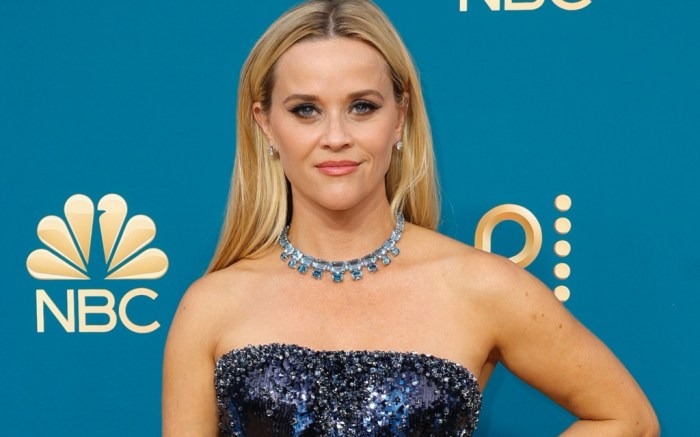 Reese Witherspoon was seeing blue at the 2022 Emmy Awards.

The “Morning Show” star arrived at the Microsoft Theater in a statement dress by Giorgio Armani. Her sequined number featured numerous blue tones across a strapless silhouette, complete with a folded draped front and curved ankle-length hem. A sparkling diamond ring, stud earrings and blue diamond collar necklace by Tiffany & Co. as well as a Tyler Ellis clutch, completed her Petra Flannery-styled outfit for the occasion.

When it came to shoes, Witherspoon’s outfit was complete with a set of black Aquazzura sandals. Her style featured thin rounded soles with delicate toe straps, topped with winding straps that wrapped around her ankles for a sleek cutout effect. The set was finished with matching stiletto heels totaling 3-4 inches in height, providing a sharp height boost for the actress’ ensemble. It also created a clean base for her outfit, allowing it to further shine on the red carpet.