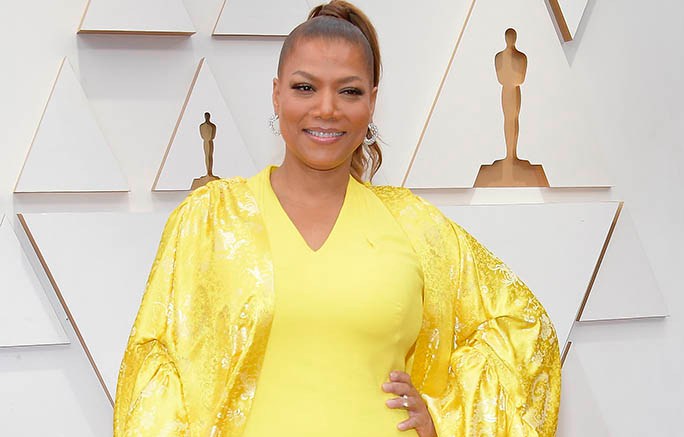 Queen Latifah was glowing in gold and yellow on Sunday at the 2022 Academy Awards Governors Ball held at the Dolby Theatre in Los Angeles. “The Equalizer” star made a vibrant arrival in a sleeveless yellow gown that featured a halter neckline by Pamella Roland.

The hip hop legend exuded Hollywood glamour as she teamed her bright form-fitting dress with a satin sequin shawl. The garment prompted a kimono vibe as it included a long train and draped elegantly over her shoulders.

Latifah styled her signature caramel tresses in a high wavy ponytail and opted for soft neutral glam. The “Ladies First” hitmaker took things up a notch with diamond hoop earrings and touted a small square white clutch. While her shoes were not fully visible under her gown, Latifah is known to step out in pointy pumps, strappy sandals and high heel stilettos at red carpet events.

The 2022 Academy Awards — also known as the Oscars — celebrates the top talents across the film industry. This year’s event, held at the Dolby Theater in Los Angeles, was hosted by Amy Schumer, Regina Hall and Wanda Sykes.