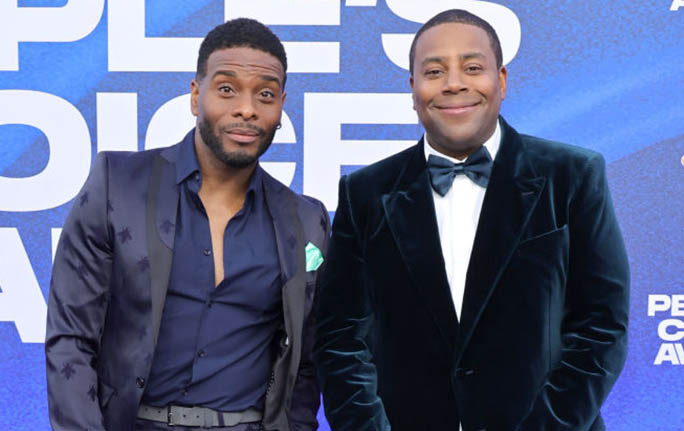 Kenan Thompson and Kel Mitchell got reunited at the 2022 People’s Choice Awards held at the Barker Hangar in Santa Monica, Calif. tonight. The annual ceremony celebrates the biggest names in entertainment— with Kenan Thompson serving as the host for the second year in a row.

Thompson was sharply suited for the affair, arriving in a dark velvet tuxedo jacket, which he coordinated with white button-down shirt and blue pleated trousers. The “Saturday Night Live” star completed his look with a satin bow tie and shiny black leather loafers.

Mitchell put his own spin on a sophisticated style moment for the event. The “Good Burger” actor appeared on the purple carpet in a dark printed suit. His ensemble consisted of a double-breasted blazer jacket and coordinating trousers. Mitchell complemented his outfit with a navy blue button-down shirt, which he left undone.

When it came down to the shoes, the 44-year-old comedian completed his look with a pair of grey suede Chelsea boots. The silhouette included an almond-shaped toe, elastic gores on the inner sole for a flexible fit and a small black square heel.