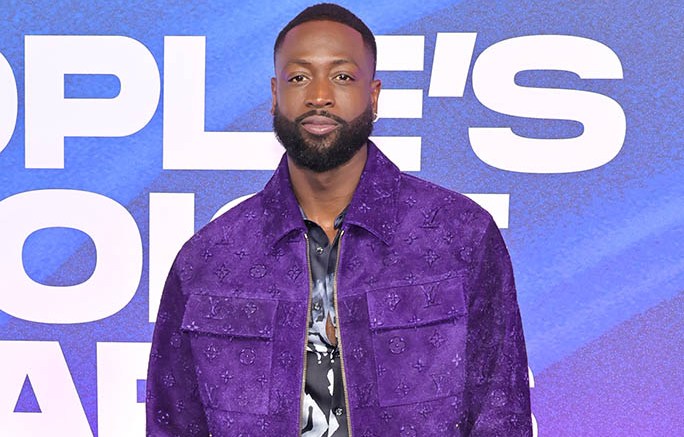 The stars are out in full force for the 2022 People’s Choice Awards held at the Barker Hangar in Santa Monica, Calif., tonight. The annual ceremony celebrates the biggest names in entertainment with Kenan Thompson serving as the evening’s host for the second year in a row.

Dwayne Wade was one of the many famous faces to make an appearance on the purple carpet. The former Miami Heat basketball player looked stylish for the evening, wearing a cropped purple suede Louis Vuitton jacket. The outerwear featured a sharp structured collar, gold zipper detailing at the center and had wide square pockets on each side.

Wade wore the coat with a black and white printed silk shirt, which he left partially undone and pleated trousers. The bottoms featured side slant pockets and had a slight flare on the leg. For accessories, the athlete added jewels by Tiffany & Co. including Tiffany T earrings and rings.

When it came down to the shoes, Wade completed his look with the late Virgil Abloh’s Louis Vuitton x Nike Air sneakers from his spring 2022 collection. The shoe style was outlined with Louis Vuitton’s signature logo and had white laces.