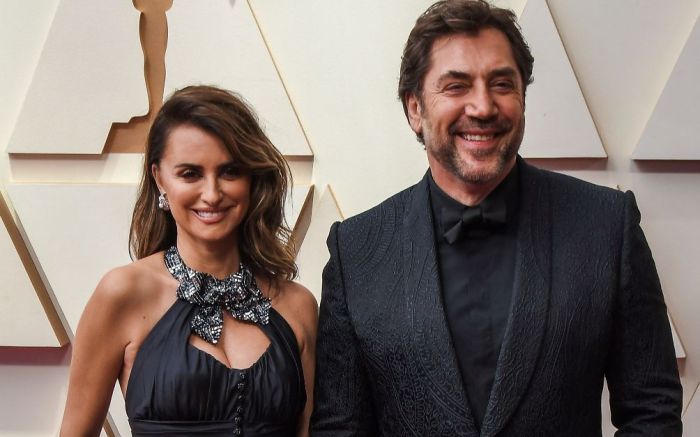 Penelope Cruz was joined by fellow actor and husband Javier Bardem on the red carpet tonight in Los Angeles at the 2022 Oscars.

The pair looked stunning in black, with Cruz wearing a black and silver Chanel halter dress that tied in a tweed bow around her neck. The actress’ dress featured buttons running down the top half towards the middle. The gown‘s skirt was large and had an expansive shape. The skirt was slightly pleated and long, with the hem stopping just above the carpet, hiding the actress’s shoes.

Cruz opted for chunky gold rings and silver studs, choosing to mix metals in a stylish way. A pair of strappy silver or black heels would have complemented the look, so it wouldn’t be a surprise if that was what the Chanel ambassador chose.

Bardem wore all black, spicing up the look with an embossed suit jacket that featured a raised paisley print. The print is subtle but added textural details that made it sharp. The actor wore a black tie, black slack and a black button-down underneath the paisley jacket, keeping the rest of the ensemble simple and classic. Bardem went for a black dress shoe with a bit of shine and a commanding pointed toe.

Click through the gallery to view more arrivals at the 2022 Oscars red carpet.