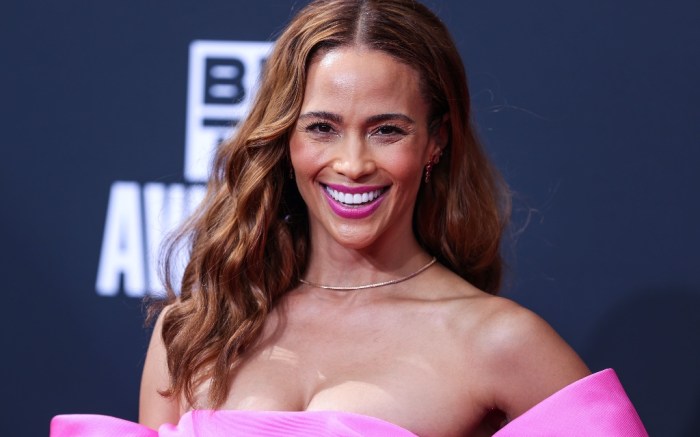 Paula Patton brought a bright pop of color to the red carpet.

The “Deja Vu” actress hit the BET Awards on Sunday in LA. She served as a presenter for Best Actress award later in the evening, which was won by Zendaya for “Euphoria” and “Spider-Man: No Way Home.” To the event, Patton wore a hot pink mini dress with an off-the-shoulder neckline. The dress featured large, puffy sleeves as well as. ruching along the top portion of the garment. Patton kept her accessories minimal, but classic. She wore dainty earrings, a necklace, a bracelet and a small ring.

Patton kept the monochrome look going with her footwear. She added a pair of pink peep-toe heels to the outfit. The heels featured a large pearl detailing as well as an ankle strap. The block heel added at least 4 inches to Patton’s frame.

Patton’s “Sacrifice” costar, Juan Antonio, joined her on the red carpet. He wore a more casual look consisting of a navy suit jacket, a crisp white button down, ripped skinny jeans and black boots. He accessorized with chain necklaces, stud earrings, rings and a wristwatch.

The BET Awards celebrate the achievements of musicians, actors, athletes and more throughout various entertainment fields. The first BET Awards took place in 2001 to celebrate Black culture and Black excellence. Taraji P. Henson is the host of this year’s show with performances by Lizzo, Latto and Jack Harlow. Leading nominations from the show included Doja Cat with six nods, Ari Lennox and Drake with four nods each.

See more of the red carpet arrivals at the 2022 BET Awards here.