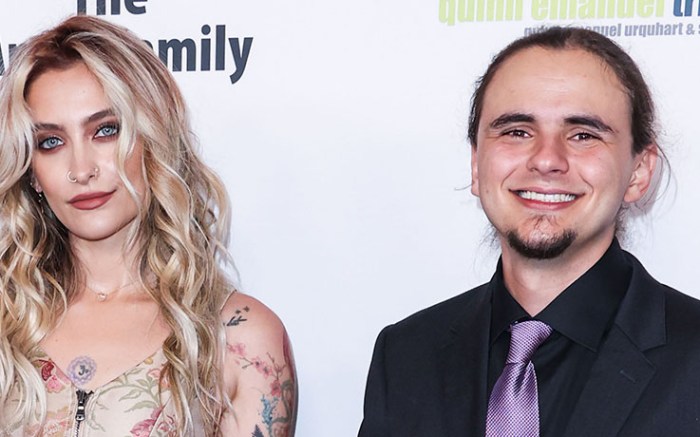 Paris Jackson and her brother Prince Jackson attended the 22nd annual Harold and Carole Pump Foundation Gala at The Beverly Hilton Hotel in Los Angeles on Aug. 19 in their sharpest outfits amplified by sleek footwear.

For the charity event, which benefits cancer initiatives, Paris wearing a zip-front floral-print midi dress. The botanical outfit was fitted with a belt made of the same fabric that brought the waist inward, while the skirt portion jutted outward thanks to pleats on the sides.The eclectic tattoos on Paris’ arms had a striking resemblance to the garment’s pattern, creating the illusion of a long-sleeve silhouette.

The dress incorporated silver hardware, which gave way to deep pockets and added an interesting edge that contrasted the dainty flowers and neutral cream hue. The singer-song writer accessorized in her own bohemian-inspired way, layering on beaded bracelets, rings, and a barely-there gold chain necklace for good measure. Paris carried a wine-colored leather purse that matched her footwear.

Forever following grungy style cues, the model and actress wore red leather combat boots with thick rubber soles and round, pronounced toes. The shiny shoes stopped just above her ankles and were laced up with black cord threaded through silver eyelets.

Prince went with his usual sleek suiting in all-black that included a button-down shirt and trousers. Prince added a subtle pop color with a lavender tie. The son of Michael Jackson stuck to the classics, lacing up black monk strap dress shoes.

A mainstay of Paris’ wardrobe, combat boots are utilitarian footwear created for foot protection, ankle support and a gripping tread. Originally designed to be worn by soldiers on the battlefield, the style was classically made of black leather. Combat boots were adopted by counterculture movements in the 1980s and 1990s, like the goth, punk, grunge and heavy metal scenes.