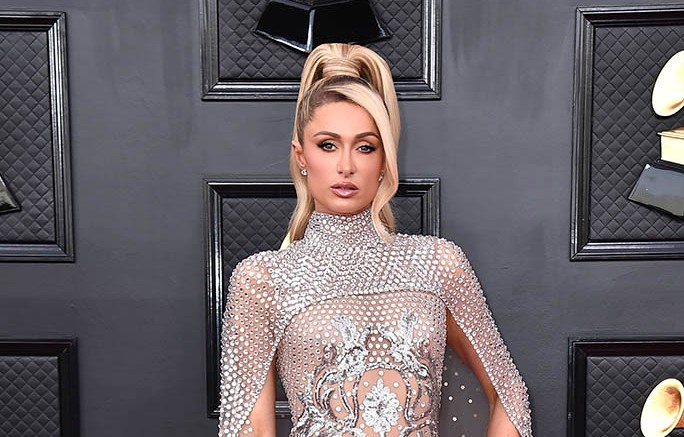 Paris Hilton shined on the red carpet at the 2022 Grammy Awards held at the MGM Grand Garden Arena in Las Vegas on Sunday night.

The DJ and heiress looked stunning in a sheer cape by Atelier Zuhra that had a mock neck and was adorned with silver gems. The cape sat atop a nearly transparent form-fitting gown by Peter Dundas that was complete with metallic details. The dress also included a modest train.

The “This is Paris” podcast host took things up a notch with matching shimmering fingerless gloves and diamond stud earrings. She styled signature blond tresses into a sleek ponytail with one free strand that framed the side of her face.

To continue with a glamorous aesthetic, the socialite and businesswoman with bronzy eyeshadow, a striking winged eyeliner and a soft neutral pout. Her see-through gown allowed for a peak at her footwear, which appeared to be silver metallic pointed-toe pumps. The silhouette included a triangular pointed toe and a thin stiletto heel.

Click through the gallery to see more of the 2022 Grammy Awards red carpet arrivals.