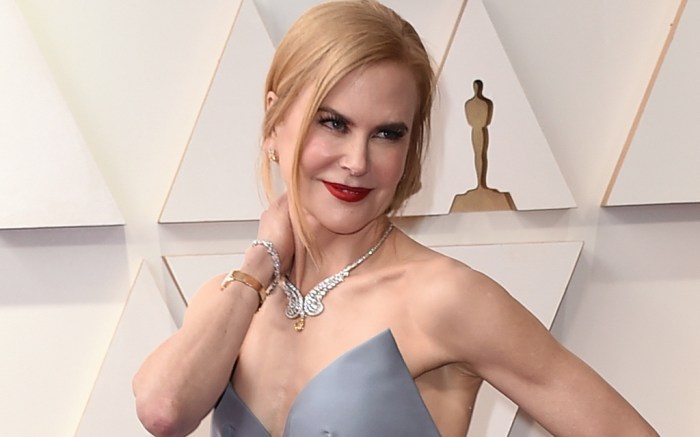 Nicole Kidman epitomized movie star glamour on the red carpet at the 2022 Oscars at the Dolby Theater in Los Angeles.

The “Being the Ricardos” actress hit the red carpet with husband Keith Urban in a custom Armani Privé gown. Kidman’s dress featured a gray-blue tone with a structured corset bodice — which included two flared cups that created a plunging neckline. Kidman’s look also featured a bunched peplum waist, slim-fitting skirt and dramatic trailing bow sash — embellished in a sprinkle of sparkling crystals. Elevating her outfit’s glamour were a diamond bracelet, collar necklace and stud earrings, plus a sharp gold watch.

“They dyed this,” Kidman shared with Laverne Cox while discussing her outfit’s hue. “I said, ‘I really want to wear blue,’ so they made this color.”
When it came to shoes, Kidman’s footwear was mostly hidden beneath her gown’s long train. However, she was spotted in a silky set of heels that featured a pointed-toe silhouette with angular front straps. The monochromehigh heels, which instantly streamlined her look, likely included stiletto heels totaling 3-4 inches in height, like similar pumps worn on the carpet.