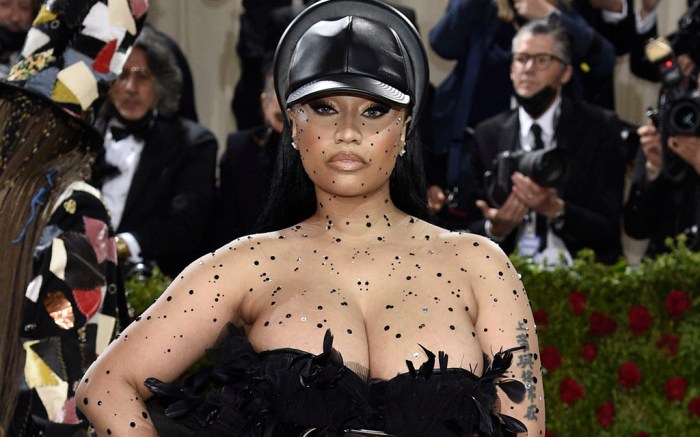 Nicki Minaj made a commanding arrival on the steps of Met Gala 2022 in New York tonight.

The rap star wore a unique Burberry ensemble, working closely with designer Riccardo Tisci to create a look worth remembering. The star finally attended this year’s Met Gala after skipping out on the last one.

The hitmaker wore a black gown with a sweetheart neckline lined in feathers and voluminous black tulle. The dress was open in the front and cinched with a gigantic belt and an even bigger silver belt buckle. It parted ways to show off tight leather pants that are almost eclipsed by the sheer magnitude of the gown.

On her feet, Minaj wore a black leather boot that blended in with the leather pants. Adding drama, she wore a domed black leather baseball cap on her head and decorated her body in black rhinestones all the way up to her face. Minaj’s smokey intense makeup was done by Pat MacGrath.

See what Minaj wore for her new music video.