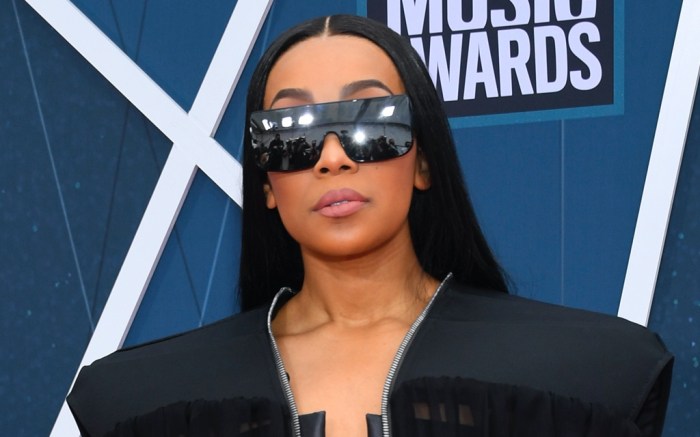 Monica brought grunge to the red carpet while arriving at the 2022 CMT Awards tonight in Nashville.

The “Boy Is Mine” singer posed in a black leather dress from Rick Owens’ Spring 2022 collection, which featured a strapless silhouette with a draped slim-fitting skirt. Giving the piece extra edge was a slick bodice featuring a vertical neckline and triangular front cutouts, layered under a broad-shouldered black bolero to create a bandeau top effect. Monica’s look was finished with oversized sunglasses for a sleek finish.

Monica stuck to her all-black palette with a matching pair of boots. The “Miss Thang” musician appeared to be wearing a thigh-high or over-the-knee style crafted from black suede, featuring sharp pointed toes. Though her heels weren’t visible, Monica’s footwear likely featured 3-4-inch heels in a stiletto or block silhouette. The shoes completed her look with a head-to-toe monochrome appearance.

The CMT Awards celebrate the top music videos and television performances by country musicians. The 2022 ceremony, broadcast from Nashville, will be hosted by Kane Brown, Anthony Mackie and Kelsea Ballerini. This year’s event also includes numerous star-studded performances from Carrie Underwood, Miranda Lambert, Keith Urban and more. Nominations are led by Brown with four — including video of the year — as well as Ballerini, Mickey Guyton and Cody Johnson with three each. The show will be airing live from CBS and streaming in Paramount+ at 8 p.m. ET.