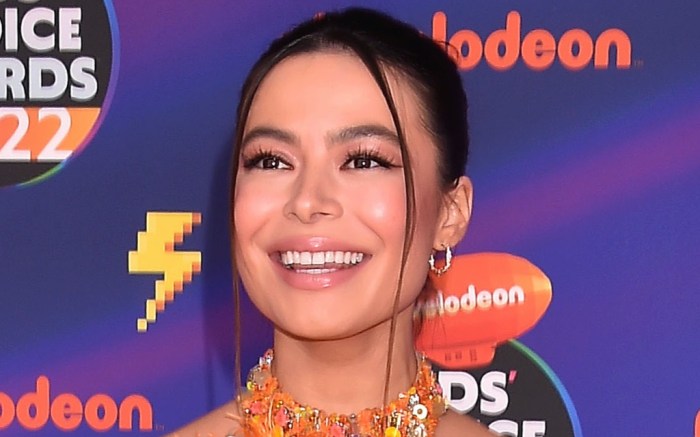 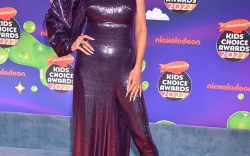 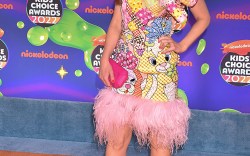 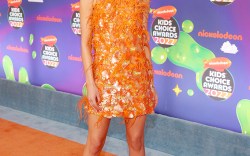 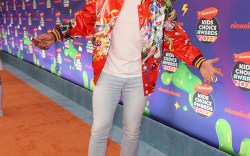 Wake up, members of my nation: Miranda Cosgrove stepped out on Saturday for the Nickelodeon Kids’ Choice Awards. While arriving to the ceremony with co-host Rob “Gronk” Gronkowski, she also made a splashy return to the orange carpet.

Cosgrove notably won the ceremony’s Favorite Female TV Star award for her starring role in “iCarly” — which she was nominated for five times during the show’s original 2007-2013 run.

While hitting the step-and-repeat, the “Despicable Me” actress struck a pose in a backless minidress by Athenian couturier Celia Kritharioti. Styled by Jessica Paster, her ensemble featured a curved halter-neck silhouette covered in orange, pink and gold sequins. Giving the piece added whimsy were sprays of orange feathers. Completing Cosgrove’s look was a chic updo, as well as thin gold Sydney Evan hoop earrings, bangle bracelets and rings accented with sparkling diamonds.

For footwear, Cosgrove coordinated with her jewelry in a slick pair of pumps by Voyetté. The star’s $250 Sky-J style featured metallic gold uppers with pointed toes in a snakeskin texture. Completing the pair were utterly daring heels: 4.33-inch stilettos crafted to look like golden barbed wire. Cosgrove’s footwear provided an added edge to her playful ensemble, while remaining glamorous and eye-catching.