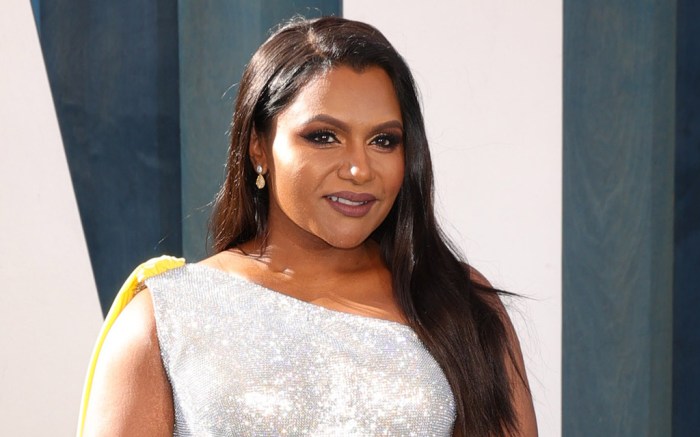 Mindy Kaling glitters and sparkled for celebrating the Oscars tonight at the Vanity Fair Oscars Party in Los Angeles. On her arm was B.J. Novak, her former co-star from “The Office,” who looked dashing in a black suit. The star-studded event hosted celebrities like Jeff Goldblum, Gabrielle Union, Dwyane Wade, Sophie Turner, Joe Jonas and Jessica Alba.

The comedic-actress donned a silver and yellow one-shoulder gown that had a glittery bodice, which blended seamlessly into a yellow skirt that draped along the hip. A thigh-high slit added an edgy twist.

Kaling decided to keep her accessories simple while wearing a pair of dangling gemstone-emblazoned earrings.

Although her shoes got covered up by her floor-length hemline, as she moved on the carpet a pair of silver metallic platforms were seen through the skirt’s slit. The heels had a height of approximately 4 inches and an ankle strap for maximum security.

Though she is known for her acting chops, Kaling has also ventured into the fashion industry, having starred in campaigns for labels like DSW and Tory Burch.

Vanity Fair’s buzzy after-party is one of the most highly anticipated annual events following the Oscars. Earlier, the 2022 Academy Awards ceremony celebrated the top talents across the film industry. The event, held at the Dolby Theater in Los Angeles, was hosted by Amy Schumer, Regina Hall and Wanda Sykes. The star-studded party had appearances from celebrities like Gabrielle Union, Dwyane Wade, Mindy Kaling and Jessica Alba.