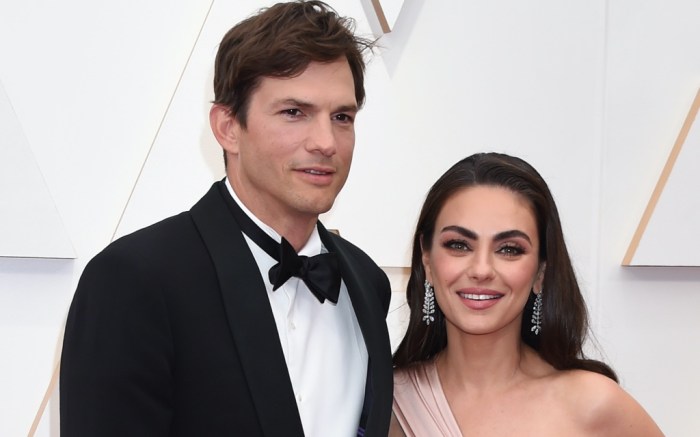 Mila Kunis and Ashton Kutcher’s latest date night was utterly romantic — in fact, the couple took it to the red carpet at the 2022 Oscars in Los Angeles.

The “That ’70s Show” stars arrived at the Dolby Theater in sharp style, with Kunis dressed in a pink silk gown by Zuhair Murad. The couture piece featured draped panels that created a wrapped effect, including a cutout strapless top, slim-fitting skirt and flowing train — all cinched with a matching belt. Kunis accessorized with glamorous diamond drop earrings and a cocktail ring. Kutcher was equally elegant, wearing a classic black tuxedo and matching leather brogues.

When it came to shoes, Kunis’ footwear wasn’t visible beneath her long skirt. However, the “Luckiest Girl Alive” star wore a pair of Jimmy Choo’s Rosie platform sandals for the occasion. The high heels included rosy pink satin uppers, as well as cutout counter and heel straps, buckled ankle straps and 4.72-inch stilettos for a glamorous height boost. The style was a popular silhouette for Oscars events, worn by stars like Becky G, Jessica Alba, Regina Hall and more.