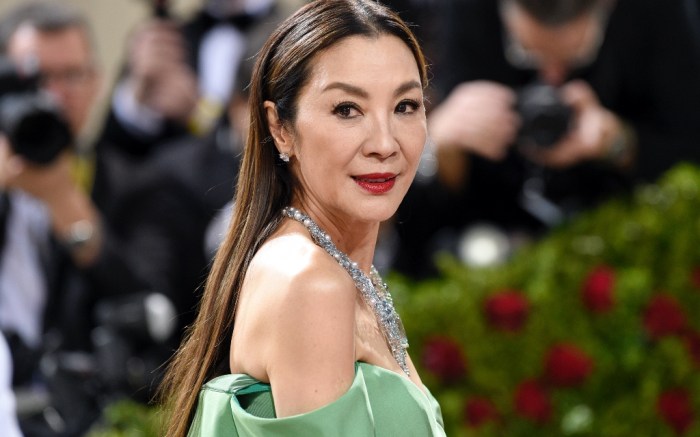 The “Everything, Everywhere All At Once” star arrived on Monday to the “In America”-themed occasion at the Metropolitan Museum of Art, wearing a green upcycled silk-faille gown by Prabal Gurung. The piece featured a sharply draped bodice with an off-the-shoulder silhouette, complete with a sweeping skirt with a fluted hem. The elegant ensemble was finished with a dramatic matching cape. Amplifying the glamour of Yeoh’s outfit was a show-stopping diamond and pearl Tasaki statement necklace — also designed by Gurung — as well as a matching cuff bracelet and white wristwatch with a diamond-encrusted face.

Though Yeoh’s footwear was not visible, it’s likely the star wore a pair of pumps or strappy sandals in a complementary or metallic tone — two of the evening’s top styles on the red carpet. Green was also a top color of choice for numerous stars at the Gala in addition to the “Crazy Rich Asians” actress, including Gwen Stefani, Tommy Dorfman and Blake Lively.