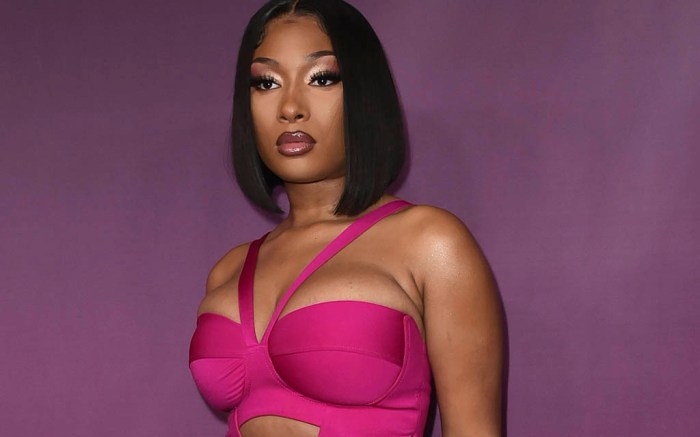 Megan Thee Stallion made a daring statement in pink at the premiere of “P-Valley” last night at Avalon Hollywood in Los Angeles to ring in season two of the popular TV show.

Stallion came to the carpet with her best foot forward dressed in a pink gown. The performer’s dress was halter style with a sweetheart neckline. The fashionable rapper’s sleeveless number featured risque cutouts. The strands of fabric that make up the gown crisscross just beneath the star’s bodice, creating a weaving pattern that creates little pockets of space.

The dress featured a high slit running up the side, starting at the star’s hip. The rapper wore a couple of stacked gold bracelets and gold rings and wore her hair in a sleek face-framing bob. Stallion’s makeup consisted of pink and lavender hues, finished off with a glossy lip.

For shoes, the rapper went for more pink, donning pink strappy heels to match her dress. Much like the gown, the shoes also had a crisscross detail that went around the star’s ankles and across the tops of her feet. The hot pink sandal had a rounded toe and an open, breathable style, making them the perfect heels for summer. The heels themselves aren’t extreme.

“P-Valley” is a drama series that first premiered on July 12, 2020, on Starz. The show follows the story of several people as they try to make a living for themselves by working in a strip club in Mississippi. The television show stars actors Brandee Evans, Nicco Annan and Elarica Johnson