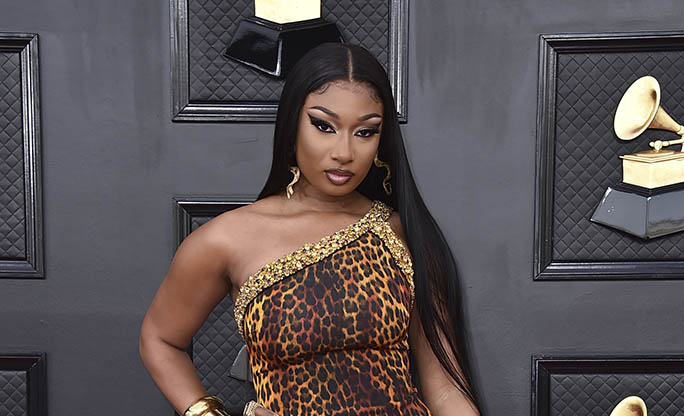 Megan Thee Stallion embraced her wild side at the 64th annual Grammy Awards in Las Vegas on Sunday. The Houston Hot Girl made her second debut at the annual ceremony in a risky one-shoulder gown by Roberto Cavalli.

The “Cognac Queen” rapper had all eyes on her as she arrived in a sleek dress by Roberto Cavalli, which featured a one-shoulder silhouette with gold neckline trim, as well as dual prints with a leopard pattern on the outer fabric and an ombre zebra pattern on the inside. The form-fitting number also included a risky thigh-high slit that was met with a gold stud decoration on the hip.

When it came down to footwear, the entertainer rounded things out with black strappy sandals. The patent leather silhouette  featured a double-strap across the toe and the ankle.