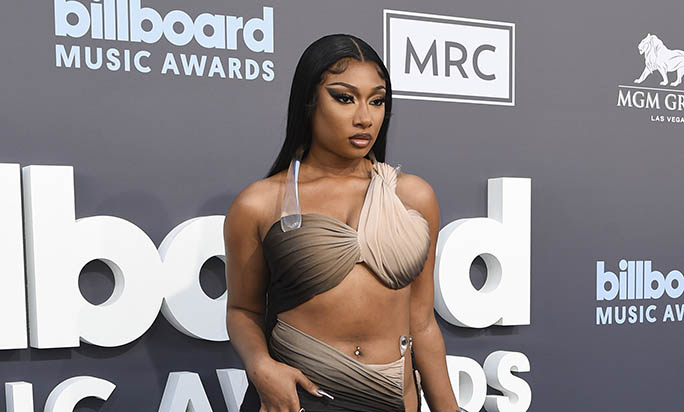 Megan Thee Stallion’s fierce fashion looks don’t stop. The Houston Hottie had all eyes on her as she arrived at the 2022 Billboard Music Awards on Sunday. It is a big night for Megan as she is up for the “Top Female Artist” Award and will make her BBMA’s stage debut during tonight’s show, which is being held at the MGM Grand Garden Arena in Las Vegas.

The “Savage” hitmaker looking stunning as she hit the carpet in a smokey beige ombré mini dress. The form-fitting number featured an asymmetrical and futuristic strap. The skirt portion of the ensemble had a risky side cutout and a modest sash that draped from the hemline of the garment.

Megan complemented the look with bone straight hair, a sultry smokey eye and a neutral matte lip. The award-winning rapper added a stylish clear chunky bracelet and long metallic nails. To amp up her look, she slipped into a pair of open-toe stiletto sandals. The shoe style featured a gold rhinestone that sat in between the toes and a sharp black heel.