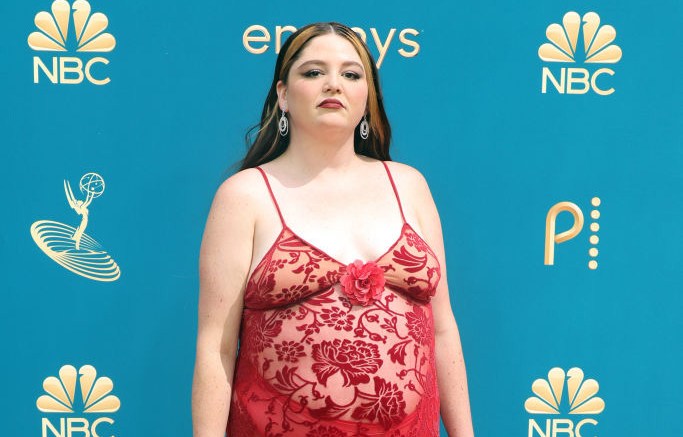 Megan Stalter made a fiery arrival at the Emmy Awards red carpet 2022 on Monday, at the Microsoft Theater in Los Angeles.

The “Hacks” star walked the red carpet in a bold red sheer dress designed by Norma Kamali. The ensemble had a V-neckline, skinny straps, and flower embroidery all over.

Stalter accessorized minimally with a pendant necklace and silver earrings. As for footwear, the actress completed her look with <a title=”Original URL:
https://www.thereformation.com/products/mimi-buckle-pump/1311308HRP.html?dwvar_1311308HRP_color=HRP

The stylist behind Stalter’s look is Kat Typaldos, who has worked with Billie Eilish and Kristen Bell in the past. Melissa Hernandez did her makeup, and Clayton Hawkins took care of Stalter’s hairstyle. Hawkins has worked with Olivia Rodrigo, Aubrey Plaza and Elizabeth Olsen before.

Stalter plays Kayla in “Hacks”, which received a 17 Emmy nominations this year, after winning three trophies last year. Stalter’s co-stars Jean Smart and Hannah Einbinder are both nominated for an Emmy this year.