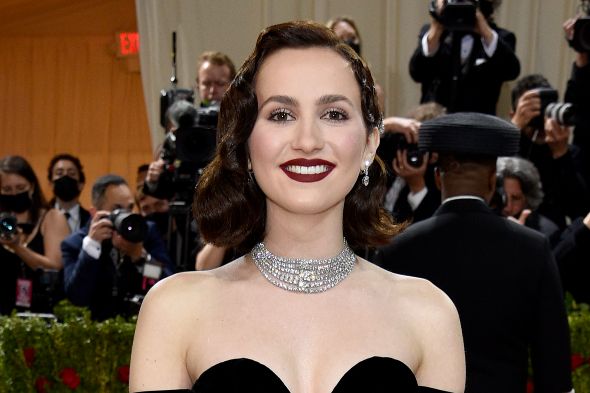 Dressing for your first Met Gala must be intimidating, but Maude Apatow isn’t letting anyone see her sweat. The “Euphoria” star stepped onto the prestigious fashion ball’s red carpet in an all-black outfit, taking some cues from the fashion influencers of the 1920s as well as old Hollywood glam.

The 24-year-old star wore a black off-the-shoulder gown by Mui Mui. Apatow’s dress featured elegant across-shoulder straps, which were in black velvet to match the velvet cups of the gown. The remaining portion of the dress was crafted in opaque black lace dotted with black sequins. The risque gown also featured beaded fringe detail that collected toward the bottom of the dress and scattered up the legs.

Apatow wore her hair in a 1920s-inspired finger wave style, wearing elegant diamond drop earrings, a few diamond rings, and a bold diamond choker. Her makeup was kept quite simple, save for a deep burgundy lip that matched the feel of her gothic ensemble.

This year’s Met Gala dress code is Gilded Glamour, which hints at the Gilded Age between 1870 to 1900. Though Apatow’s inspiration falls a little outside that range, no one can deny she looks exquisite.