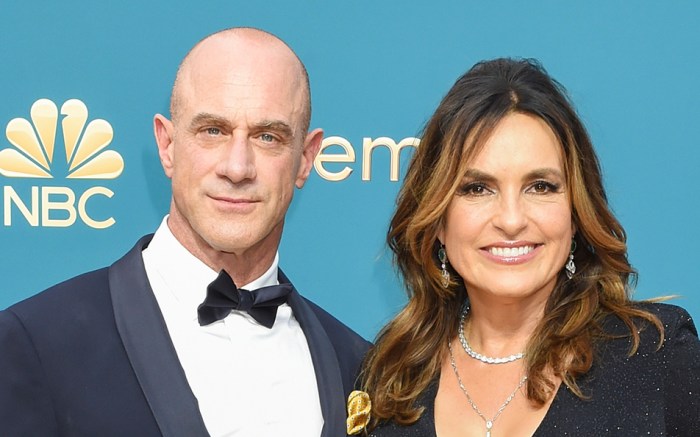 Mariska Hargitay stepped on the gold carpet for the 47th Annual Primetime Emmy Awards at the Microsoft Theater in Los Angeles accompanied by her “Law & Order” co-star Christopher Meloni. Both parties were dressed in formal wear which they paired with chic black shoes.

Hargitay was clad in a black long sleeve gown with a risky plunging neckline and dotted with golden sparkles. The skirt featured a daring side slit and was ruched to one side, adding an interesting textural element. The accomplished “Law & Order” actress amplified the shine, donning stacked silver chains which she paired with matching dangling earrings.

When the Emmy Award-winner took to the stage, she ended up taking her heels off in the process. The philanthropic star wore black strappy sandal heels.

Hargitay’s highlighted tresses were parted in the middle and styled with sweeping curls while her makeup was much more simple, topped off with a glossy nude lip.

Meloni stood by his co-star classically dressed in a dark blue suit that consisted of a fitted jacket and white button-up coupled with tailored slacks. The 61-year-old actor wore a sharp black bowtie and slick dress shoes of the same color for good measure.

While on set for “Law & Order: SVU,” Hargitay was spotted wearing neutrals, dressed for fall in a black square toe boot, creased black pants, a black belt, a black T-shirt, and a brown leather jacket with a single button. This outfit took a smart and sophisticated approach to the often shunned color combination.

PHOTOS: See what other celebrities wore to the 2022 Emmy Awards.