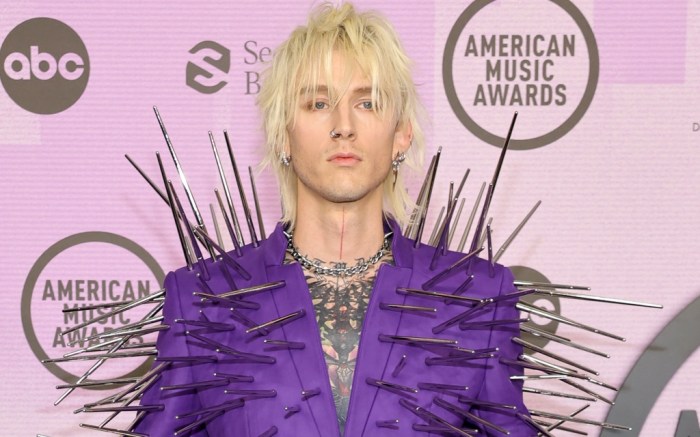 While hitting the red carpet at Los Angeles’ Microsoft Theater, the “Mainstream Sellout” musician posed in a purple skinny suit. Styled by Adam Ballheim, his ensemble featured a slim-fitting blazer and matching slacks — worn sans-shirt — that were coated in thin silver spikes, giving him the appearance of being stuck with numerous pins.

Enhancing his outfit’s grunge edge was a range of silver jewelry, including a spike-accented chain necklace, two bracelets, layered thin earrings and rings and a nose ring.

When it came to footwear, the “Bloody Valentine” singer finished his attire with a set of black leather combat boots. The lace-up style, however, gained a rock n’ roll edge from thick lug soles accented by silver metallic pyramid studs. Similar upper studs, as well as front silver panels, completed the lace-up style with a truly grungy finish.

The AMAs honor the year’s top achievements in the music industry — and claims the honor of being the largest fan-voted awards show in the world. The 2022 ceremony, hosted by Wayne Brady on Nov. 20 in Los Angeles, will feature a range of performances by Carrie Underwood Imagine Dragons, David Guetta and Anitta. The evening will also include a musical tribute to Lionel Richie — winner of the event’s 2022 Icon Award — by Charlie Puth, Stevie Wonder and Ari Lennox, as well as a performance by Pink in honor of the late Olivia Newton-John.