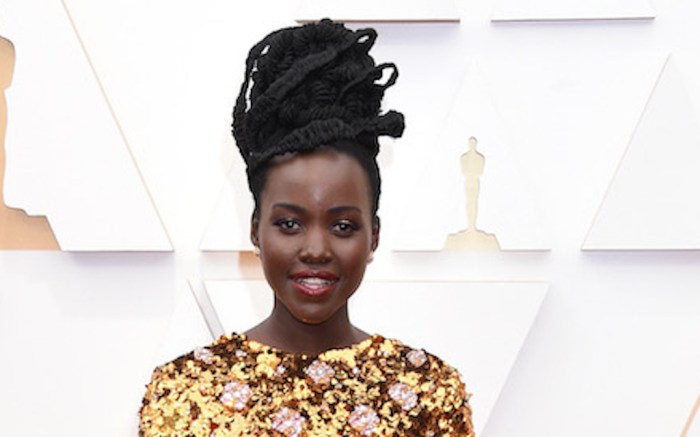 Lupita Nyong’o shows up to the Oscars red carpet in a bold way. The “12 Years a Slave” star attended the 94th Academy Awards in Los Angeles today, where she made a statement in a striking ensemble.

The actress went with a gold sequined gown from Prada that featured pink floral appliques, also made out of eye-catching sequins, strewn all over the garment. The piece also had 3/4 sleeves for a modern finish, and it had matching fringe along the skirt of the dress that added movement to her train.

As for accessories, she went with two big diamond-covered rings and threw her black tresses up into a braided bun that added a unifying element to her outfit.

Although her shoes got covered by her hemline, in one shot on the red carpet, as she moved on the carpet she revealed a bright pink platform heel that aligned with her floral theme.

Nyong’o has a sophisticated and chic fashion aesthetic that she displays on red carpets and on her Instagram feed alike. The “Black Panther” actress has also made a name for herself within the fashion industry, having starred in campaigns for Saks Fifth Avenue, Miu Miu and Lancôme.

The 2022 Academy Awards — also known as the Oscars — celebrate the top talents across the film industry. This year’s event, held at the Dolby Theater in Los Angeles, will be hosted by Amy Schumer, Regina Hall and Wanda Sykes. Leading the nominations is Jane Campion’s “The Power of the Dog,” as well as “Dune,” “Belfast,” “King Richard” and “West Side Story.” The event’s nominees include a range of Hollywood’s top stars, including Kristen Stewart, Andrew Garfield, Kirsten Dunst and more. The evening concludes with a range of similarly star-studded afterparties, hosted by the Elton John AIDS Foundation, Vanity Fair and more.

Click here to see the red carpet arrivals at the 2022 Oscars.