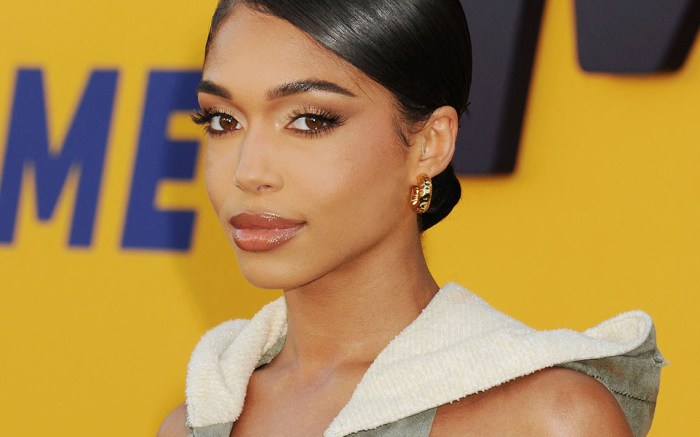 Lori Harvey attended the highly anticipated premiere for Netflix’s  “Me Time” on Aug. 23, at Regency Village Theatre in Los Angeles. She wore a lengthy gown in a neutral shade with hidden heels.

The model’s dress was sleeveless and fitted with a hood, which Harvey took down for pictures. Along with the hood, the dress featured crisscrossed drawstrings, the top half of the gown resembling a hoodie, while the bottom half emulated an asymmetrical slip skirt adorned with a strip of rough grey and red fabric.

For accessories, Harvey wore statement gold hoops and chunky wrist cuffs. The styling is grungy, pulling inspiration from the use of raw and mismatched fabrics and neutrals with a post-apocalyptic feel akin to something  Rick Owens might make. Maxi dresses and gowns often offer the wearer a lengthened appearance with little to no effort which bodes well for shorter individuals.

Although they are hidden under the hem of Harvey’s dress, the “SKN by LH” mogul wore black strappy geometric sandals with sharp stiletto heels. Often defined by long straps that wrap around the ankle and up the leg for security, strappy sandals are a popular choice with shorter dresses and other silhouettes that showcase legs.

A staple shoe of the warmer months, strappy sandals can be any heel height for versatile wear. Even though the heels were mostly eclipsed by the eye-catching garment, they worked to effectively add an extra touch of glamour to the social media personality look.

“Me Time” is an upcoming American comedy film written and directed by John Hamburg. The movie stars unmistakable talents like Kevin Hart, Mark Wahlberg, and Regina Hall. The star-studded premiere saw many recognizable names grace the red carpet in their finest evening wear. The film is scheduled to be released for streaming on Aug. 26, 2022 on Netflix.

PHOTOS: Check out some of Lori Harvey’s boldest style moments.