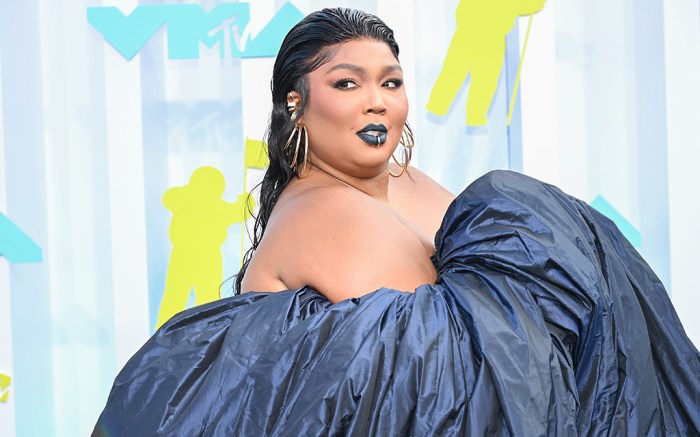 Lizzo stunned on the red carpet for the 2022 MTV VMAs tonight in Newark, NJ. The “About Damn Time” songstress arrived at the award show in a major way, sporting a Jean Paul Gaultier couture gown in a duo chrome blue-black. The off-the-shoulder moment was larger than life, the voluminous fabric gathered in such a way that it cascaded and draped like flowing water, offering the Yitty shapewear brand founder an exquisite silhouette.

The flutist and songwriter paired the eye-catching dress with see-through blue gloves adorned with chunky gold rings, the fabric disappearing underneath the ample material.

Lizzo went for a wet look, slicking her dark hair back and out of her face, her shiny tresses spilling down her back. To add to the gold bling on her fingers, the artist wore a plethora of large gold hoops and a lip ring that had her shining at every angle.

The Michigan native’s makeup was just as dramatic as her dress, with her features accentuated by a dark smoky eye and a matte cerulean lip. The body-positive singer’s shoes were not visible due to the magnitude of her dress.