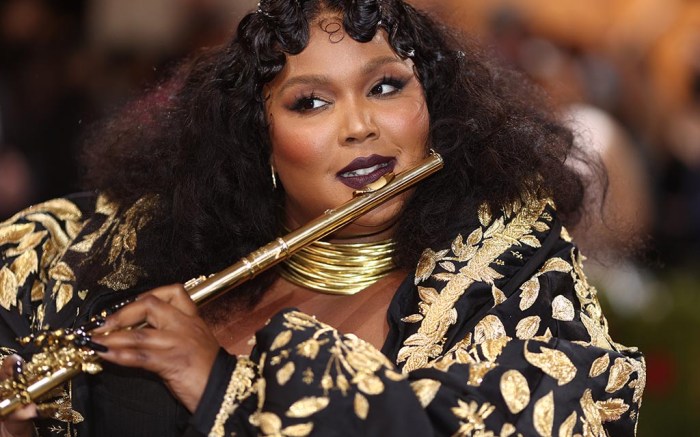 Lizzo isn’t a stranger to glamour. The powerhouse rapper and singer is often spotted in bold, glitzy looks that are gloriously trendy and full of unapologetic sex appeal. So it’s no wonder the star absolutely smashed the Met Gala’s “Gilded Glamour” dress code tonight in New York, taking all of her style must-haves and rolling them into one show-stopping look — golden flute included.

For fashion’s biggest night, the 34-year-old singer wore a unique black dress by designer Thom Browne featuring a corset-like top with boning, exaggerated hips and buttons down the front. Notably, the dress was cut into two pieces with a split around the skirt’s circumference. Small pieces of fabric along this split attached the upper mini dress portion of the gown to the lower portion of the look, which was a full floor-length skirt.

True to the night’s “Gilded Glamour” dress code, Lizzo covered the dress with a floor-sweeping black coat that incorporated golden flower embroidery, adding an opulent feel to the look. The gold embroidery reportedly took 1,200 hours to complete, with the full outfit taking 22,000 hours to make. For footwear, she wore a thick patent leather black platform.

Lizzo carried a golden flute, which matched her corkscrew black and gold acrylic nails by nail artist Eri Ishizu. Amazingly, she managed to play a flute solo on the red carpet, even with the stunning spiral acrylics. The star also accessorized the look with a thick gold choker featuring a multiple stacked ring look.

Her locks were slicked into meticulous finger waves at the crown of her head, which gradually lead into the star’s naturally curly locks. Wearing a slightly smoky eye look with statement lashes, Lizzo also went bold with her lipstick, wearing a deep burgundy color.