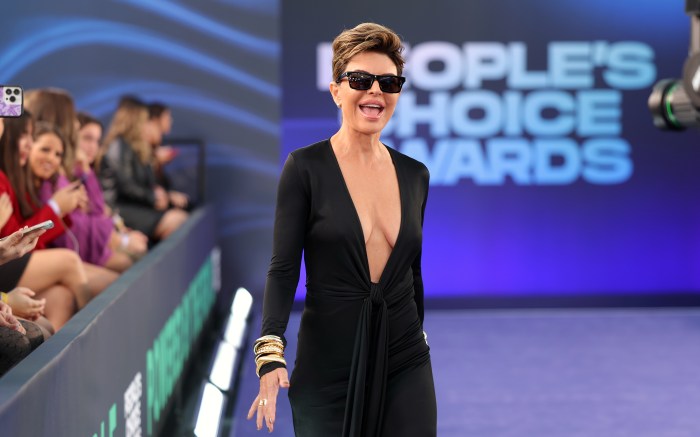 Lisa Rinna took a daring approach to the blue carpet as she arrived at the People’s Choice Awards in Santa Monica, Calif., on Dec. 6. The star could possibly be taking the stage tonight as the “Real Housewives of Beverly Hills” has been nominated alongside her cast-mates in the Reality Show of 2022 category.

The “Days of Our Lives” actress wore a long-sleeve black fitted gown with a plunging neckline that cascaded into a knotted detail that brought attention to the slight slit on the skirt.

To accessorize, the television personality opted with gold-toned jewelry with a wide variety of sparkling bangles and mini hoops. To add a sleek touch to the look, she complemented it with black sunglasses.

Rinna completed the outfit with a pair of black leather sandals. The pointed-toe heels featured a cross strap design that was decorated with a sparkling buckle. The sandals supported the tall stiletto heel with a thin ankle strap.

Rinna is usually styled by Marie-Lou Bartoli, who also works with her daughters Delilah Belle and Amelia Gray.

The actress kept her caramel brown hair in a side-swept style with minimal makeup, opting for a glossy nude pink lip.

When it comes to footwear, Rinna often gravitates towards sleek and statement heels. The “Vanished” actress usually slips into pointed-toe pumps and stiletto-heeled sandals from top labels, including Tom Ford, Versace and Saint Laurent. When off-duty, she can be seen in low and high-top sneakers by Gucci, Adidas and Nike.