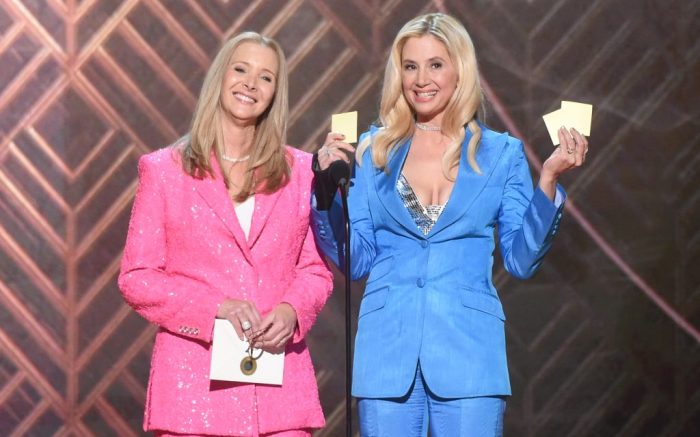 Get them businesswomen specials! Romy and Michele — we mean, Lisa Kudrow and Mira Sorvino — made a joint appearance at the 2022 SAG Awards, reprising their characters from the hit 1997 comedy “Romy and Michele’s High School Reunion.”

While presenting the Outstanding Performance by an Ensemble in a Comedy Series award, the actresses reprised their roles as the fashion designer BFFs from the cult-favorite film. In an onstage bit, the duo wore outfits similar to the movie’s namesake characters. Kudrow dressed up in a pink sequin-covered suit, while Sorvino donned a silky blue suit with a gleaming, disco ball-like top. Their glamorous sets each featured blazers with sharp pointed lapels, as well as matching trousers.

“You look cute,” Sorvino told Kudrow onstage. “I know, thanks,” Kudrow replied, referencing their characters’ favorite go-to adjective. The pair even presented with numerous Post-Its, a reference to the story they spread to appear successful and wealthy to their former high school peers in the film.