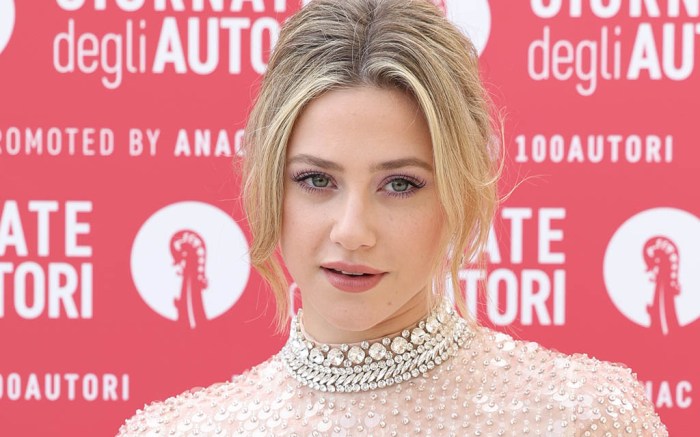 Lili Reinhart graced the 79th Venice International Film Festival in Venice, Italy for the Miu Miu “Women’s Tales” event. The red carpet affair was attended by only women, clad in the Italian designer brand from head to toe.

Reinhart was no exception to this occurrence, the star wearing a 1960s Mod-style lavender midi dress with a drop waist, high neck, and short sleeves. The top half of the dress was covered in pearlescent beads and iridescent sequins reminiscent of “The Rainbow Fish,” each scale reflecting the camera’s flash. Crystal trim lined the hem of the sleeves and mock neckline, acting as a makeshift necklace for the “Riverdale” star. The bottom half of the dress was adorned with a tiny bow, a Miu Miu signature, where the purple fabric met the sequins. Reinhart accessorized simply, carrying a silver shoulder bag.

Shining down to her feet, the CoverGirl ambassador stepped into “Decollete” crystalized pumps with a geometric heel and dainty pearl detailing.

“Women’s Tales” is an ongoing short film series created by Miu Miu. Aside from the stipulation that the films use Miu Miu clothing, all female directors are given free rein to create their films. Miu Miu has commissioned two films a year since 2011, one for their summer collection and one for the winter collection. It’s like a plot-driven fashion show, but on the big screen.

PHOTOS: Click through the gallery to see the red carpet looks from other arrivals at the Venice Film Festival.