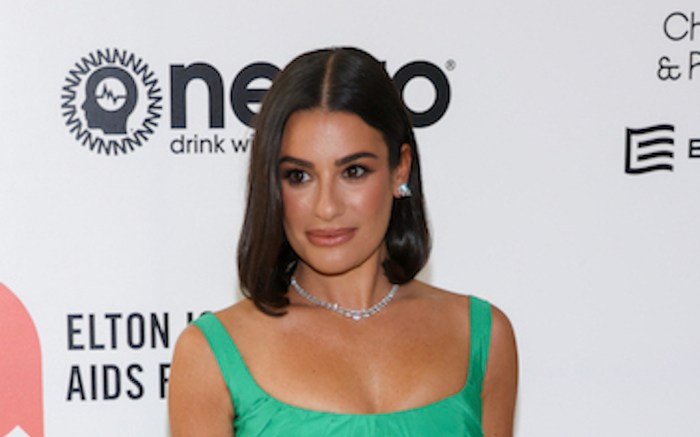 Lea Michele is a scene in her latest look for the Oscars frenzy. The “Glee” star attended Elton John’s AIDS Foundation Oscars Party in Los Angeles tonight, where she decided to go bold and colorful. The event included celebrity appearances from Gabrielle Union, Dwyane Wade, Sophie Turner and Joe Jonas.

When it comes to Michele’s outfit, she went with a billowing green gown that was both stylish and modern. The dress had a thigh-high slit and incorporated two flaps of fabric jutting out from the waistline that added an extra layer of dimension to her dress. The garment also had a plunging neckline and a long train that upped the ante of her vibrant green moment.

For footwear, she went with a pair of silver sandals. The shoes had ankle straps for maximum security and a sleek toe strap. The heels had a height of approximately 3 inches and had a metallic finish that paired well with Michele’s dress.

Michele accessorized with a diamond-covered necklace and matching sparkly earrings that rounded out her ensemble and added a touch of glimmer to her sophisticated attire.

Elton John’s AIDS Foundation Oscars Party is one of the most highly anticipated annual events following the Oscars. Earlier, the 2022 Academy Awards ceremony celebrated the top talents across the film industry. The event, held at the Dolby Theater in Los Angeles, was hosted by Amy Schumer, Regina Hall and Wanda Sykes. The star-studded party had appearances from celebrities like Gabrielle Union, Dwyane Wade, Mindy Kaling and Jessica Alba.