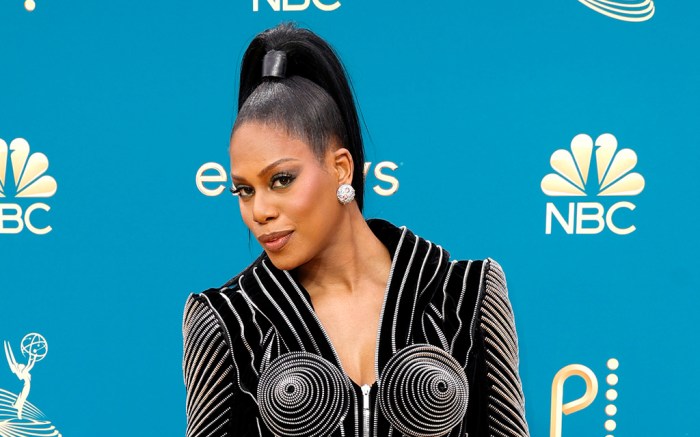 Laverne Cox took the mic at the 74th Primetime Emmys today. The event, which took place at the Microsoft Theater in Los Angeles, saw Cox interviewing her colleagues on the golden carpet clad in Jean Paul Gaultier and classic footwear.

The “Orange Is The New Black” actress’ outfit consisted of a masterwork of structured striped black and white materials made by the legendary design house in collaboration with Olivier Rousteing of Balmain. Fitted with hip pads and a high collar, the mini dress was constructed like an art piece with long sleeves and a pointy cone style bra, a signature of Gaultier’s.

The bust could very well be a nod to Madonna who had worn a similar silhouette during her Blond Ambition tour in the 1990’s. Cox paired the futuristic silhouette with sheer black tights and minimal jewelry comprised silver rings and dramatic diamond studs. The LGBTQ+ advocate wore her hair slicked back in a high ponytail and kept her makeup smokey.

Despite the wild ensemble up top, Cox kept it simple, stepping into black pointed-toe stiletto style pumps for the occasion. The neutral shoes allowed for the Glamour award-winner’s designer digs to have their moment in the sun, while keeping her comfortable in a manageable heel.

The 2022 Emmy Awards celebrate the top performances and programs in television. This year’s ceremony, held at the Microsoft Theater in Los Angeles, will be hosted by Cedric the Entertainer. HBO’s “Succession” is leading the annual event’s 2022 nominations with 25 nominations, followed by “Ted Lasso” (20), “The White Lotus” (20), “Hacks” (17) and “Only Murders in the Building” (17).
PHOTOS: See what other celebrities were wearing on the red carpet of the 2022 Emmy Awards.