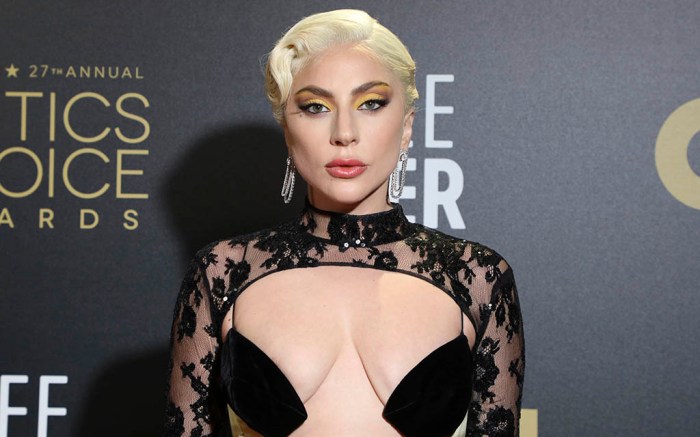 Lady Gaga took a red carpet risk at the Critics’ Choice Awards. The actress arrived on the red carpet at a separate event for the Awards at the Savoy Hotel in London, along with stars including Alana Haim, Hannah Waddingham and Juno Temple.

The “House of Gucci” star hit the red carpet in a bold gold gown by Gucci, which featured a silky gold skirt and train with a black beaded trim. The dress also featured black lace embellished long sleeves with attached gloves. However, the elegant piece gained a daring accent with a large front cutout punctuated by two black bra-like cups, and a waistline accented with firework-shaped crystals. Gaga completed the sleek ensemble with a sparkling diamond bracelet and statement earrings.

When it came to footwear, Gaga’s shoes weren’t visible beneath her gown’s full skirt. However, it’s highly likely she donned a set of towering Pleaser Shoes platform boots, similar to her recent formal-meets-punk ensembles at the 2022 BAFTAs and SAG Awards. The styles often feature close-toed silhouettes with platform soles, patent leather uppers and slick pointed heels totaling 6 inches or more.

The Critics’ Choice Awards honor the year’s top pictures and performances of film and television. This year’s event, hosted by Taye Diggs and Nicole Byer, will be broadcast from Los Angeles. Leading the film categories are “West Side Story” and “Belfast,” while the TV side is led by “Succession.” The Critics Choice acting categories are led by stars from most nominated projects, including Lady Gaga, Kristen Stewart, Will Smith, Ariana DeBose, Kirsten Dunst and Andrew Garfield.
See more of Lady Gaga’s style through the years.