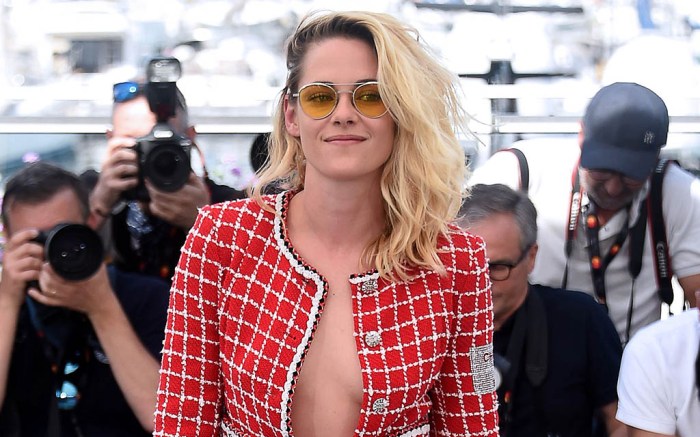 Kristen Stewart’s casual style is getting a luxe boost for the Cannes Film Festival. Below, we’re breaking down all of her grunge-meets-glam outfits, from day to night.

On Tuesday afternoon, the actress stepped out for a photocell for drama “Crimes of the Future,” which she stars in alongside Lea Seydoux, Scott Speedman and Viggo Mortensen. For the occasion, stylist Tara Swennen dressed Stewart in a preppy Chanel outfit with vintage roots: a red-and-white long-sleeved plaid take on the label’s staple wool tweed suits, featuring branded patches, white piping and silver buttons. For a daring twist, the look was styled sans top and unbuttoned to the navel. Completing Stewart’s look was a pair of silver-framed sunglasses with orange tinted lenses, plus two silver rings.

However, Stewart’s also bringing her nonchalant edge to the red carpet. For the debut screening of “Crimes of the Future” on Monday night, the star hit the Palais de Festivals with co-stars Lea Seydoux and Viggo Mortensen in a glitzy Chanel outfit. Her couture ensemble included a glittering black crop top with blue, green, pink and gold textured accents, plus a high neckline and long sleeves. Rounding out her outfit was a silky white midi skirt with a low-angled waistline that was knotted in a massive bow for a feminine flourish.

Completing Stewart’s look was a set of pointed-toe pumps, one of her longtime style signatures. This black pair gained an added edge from metallic silver stiletto heels, complementing the light-catching elements of her clothing for a subtly glamorous statement.

Earlier, Stewart set the bar with a simplistic but definitely edgy look. Stewart sported a crisp white Chanel T-shirt from its new cruise collection — that, if you look closer, the print of Chanel on her shirt is created from geometric crystals.

To complement the top, she wore slightly distressed Levi’s denim cutoff shorts. Now, into the accessories. Stewart wore just enough to keep the look sophisticated but also comfortable to her own style.

There’s the silver lock chain around her neck, a couple of rings on her left hand and one on her right, and black matte Oliver Peoples sunglasses. This look works as a blueprint of how to efficiently do simple but clean looks for daytime occasions.

On her feet, Stewart wore black platform boots with white ribbed socks, which have definitely stepped into the spotlight this year. With upward straps that can be easily loosened, the boot’s silhouette works perfectly in everyday wardrobes.