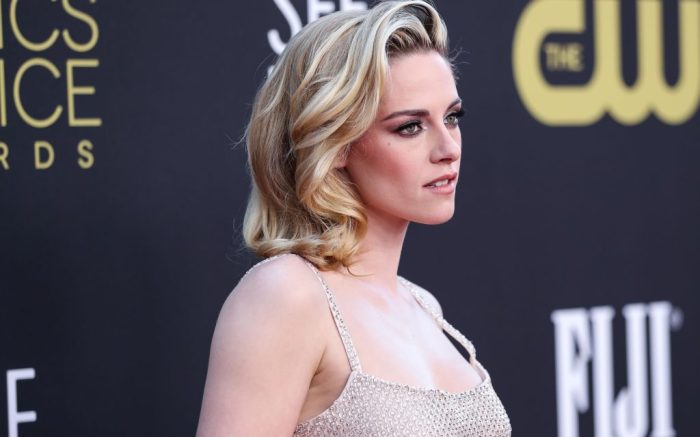 One of the season’s longest fashion shows is coming to an end—and no, we’re not talking about runways from New York, Milan or Paris.

Kristen Stewart’s press tour for “Spencer” has proven to be the most stylish of the season, with pit stops ranging from premieres to talk shows — and even the 2021 Met Gala. As Stewart earns accolades for her portrayal of Princess Diana, she’s also earning nods from the fashion world for her red carpet looks. Running through each is her signature punk attitude, bringing a nonchalant vibe to even the most formal ensembles.

The awards circuit has seen the “Twilight” star flex her fashion muscles with stylist Tara Swennen, stepping out in numerous sleek gowns, suits and separates from Chanel and other independent brands. When it comes to shoes, strappy stiletto sandals and pumps are Stewart’s go-to’s, running the gamut from Jimmy Choo to Aldo.

Below, we’re looking back on all of Stewart’s “Spencer” awards looks so far—and searching for hints of her 2022 Oscars ensemble.

Stewart packed a punch for the 2021 Gotham Awards, hitting the red carpet in New York City in a hot pink velvet August Getty Atelier gown. The strapless number was paired with neon Tamara Mellon sandals for a monochrome twist—ideal for picking up her Performer Tribute award.

The actress gleamed at the 2022 HCA Film Awards in a sequined red crop top and matching column skirt by Galvan London. Paired with the set  were Aldo’s $90 Deedee pumps, with clear black PVC counters and toes for a transparent twist.

At the Independent Spirit Awards, Stewart turned to Chanel again for a glamorous take on matching sets. Her long-sleeved top and trousers were covered in diamond-shaped white sequins and black silk panels. Completing the look was a feminine black waist bow and classic black pumps.

Stewart’s latest look at the 2022 Critics Choice Awards was her most daring yet, heralding the return of the “naked dress.” The star hit the red carpet in a nude dress covered in miniature crystals by Dolce and Gabbana. Though they were hidden by the gown’s long skirt, she stood tall in Jimmy Choo’s silky nude “Max” platform sandals.

As for what Stewart wear on March 27 for the 94th Academy Awards? It’s anyone’s guess. Based on her press tour looks, the actress will likely don a Chanel outfit with neutral sandals or pumps. However, if any of these factors are for certain, it’s up to her and Swennen—and we’ll just have to wait.

Discover Stewart’s standout shoe moments on the red carpet in the gallery.