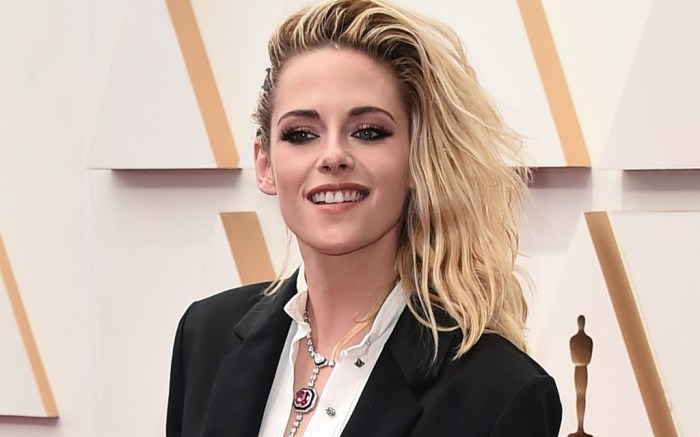 Kristen Stewart gave traditional suiting the middle finger at the 2022 Oscars at the Dolby Theater in Los Angeles, opting to show the style in her own rebellious spirit. The actress is nominated for a Best Actress award for her portrayal of the late Princess Diana in the drama “Spencer.”

The “Spencer” star hit the red carpet in a custom suit by Chanel, which included a matching black smoking jacket and short shorts. Tucked into the thigh-high bottoms was a white button-down shirt with silver buttons, which was undone to Stewart’s navel. In place of a tie, stylist Tara Swennen completed her look with a long diamond and ruby lariat necklace. In a clever move, Stewart’s fianceé Dylan Meyer arrived with her in a coordinating black suit — though hers featured a cropped tuxedo shirt, long trousers and patent leather oxfords.


When it came to shoes, the “Twilight” star chose her go-to style — pointed-toe pumps — to instantly elevated her look’s sleekness and streamline it upon first glance. The high heels, also by Chanel, featured black silky uppers with a white lining. Each rounded heel was accented with a small metallic “double C” logo. Completing Stewart’s footwear were thin silver stiletto heels totaling at least 5 inches in height, solidifying her punk rock aesthetic through a formal lens.