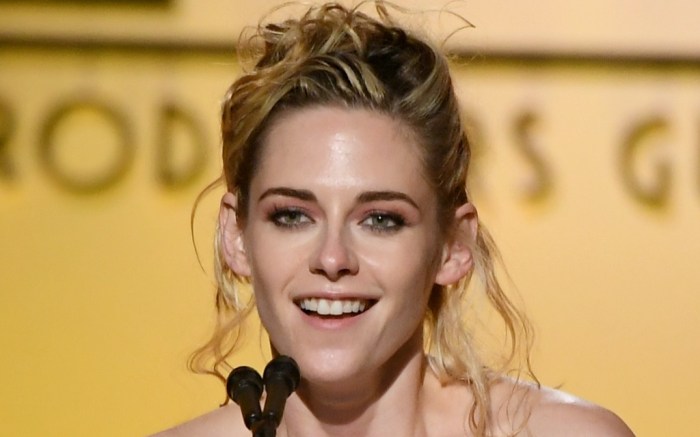 Kristen Stewart brought romantic edge to the 2022 Producers Guild Awards on Saturday night. The actress arrived at the the Fairmont Century Plaza in Los Angeles to present the Darryl F. Zanuck Award for Outstanding Producer of Theatrical Motion Pictures to the production team behind “Coda.”

The “Spencer” star wore an ivory gown by Brandon Maxwell. The strapless number, styled by Tara Swennen, featured a corset-like top that included sheer panels, a structured bodice and a silk waistline. Adding an elegant flair was a sweeping quilted skirt with a tulle underlay.

The piece created a sleek and chic ensemble, particularly when temporarily worn beneath an oversized silk-lined black blazer and vintage and Cast rings.

When it came to shoes, Stewart’s footwear wasn’t visible. The “Twilight” actress’ recent red carpet outfits have frequently featured pointed-toe pumps and sandals in dark tones, from brands ranging from Chanel to Aldo.