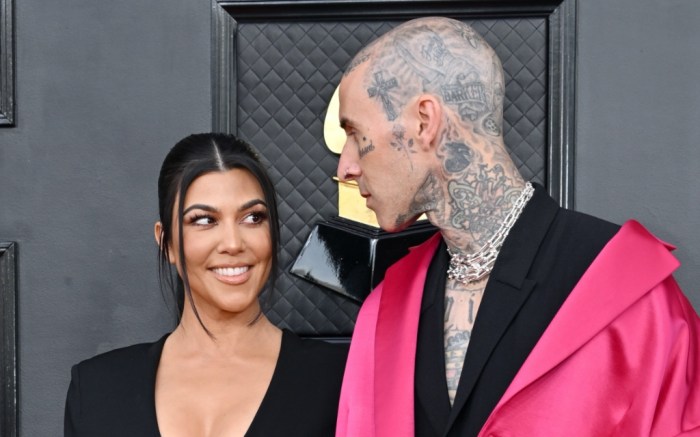 Kourtney Kardashian and Travis Barker did date night on the red carpet.

The couple hit the 2022 Grammy Awards on Sunday in Las Vegas.

During the ceremony, Barker will be performing alongside singer Sheila E., pianist Robert Glasper and music director Adam Blackstone.  Kardashian wore a black jumpsuit from Et Ochs. Her jumpsuit included cutouts on the bodice, and she added sheer gloves to the look. Barker wore a bright pink jacket from Raf Simons over a black vest and trousers set from Givenchy. Both Barker and Kardashian also carried black sunglasses.

Barker wore sleek black patent leather dress shoes on the red carpet. Kardashian’s shoes were covered by her jumpsuit, though she has been known to wear styles from luxury brands like Balenciaga, Celine and Giuseppe Zanotti in the past.

Click here to see more of the celebrities on the red carpet at the 2022 Grammy Awards.