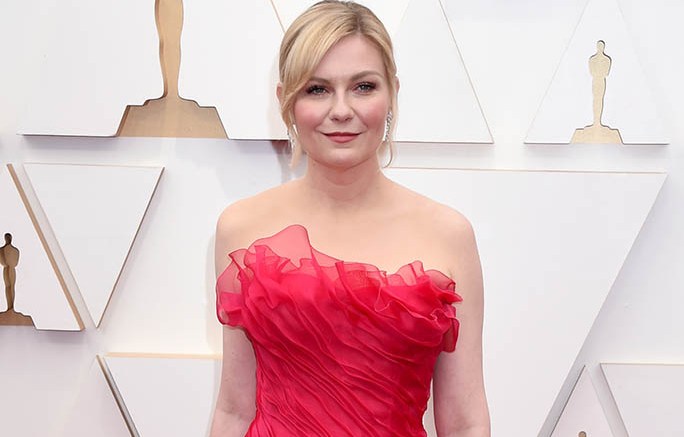 Kirsten Dunst made an elegant arrival at the 2022 Oscars held at the Dolby Theatre in Los Angeles. Dunst arrived on the red carpet alongside her fiancé Jesse Plemons. The engaged couple is nominated for Best Supporting Actress and Best Supporting Actor for “The Power of the Dog,” a fan-favorite movie that’s also in the running for Best Picture.

Dunst stepped out in a red tulle gown from Christian Lacroix Haute Couture, which she purchased from Rita Watnick of LILY et Cie. The strapless dress offered a tube feel due to the accentuation and slight cinch at the waist. The “Spider-Man” star let her dress to do all of the talking by opting for minimal accessories and soft glam. She styled her bangs with a side part and pulled the rest back.

To ground everything, Dunst slipped into a pair of red satin pumps. The silhouette featured triangular pointed toes and soft uppers. The monochrome high heels matched her gown perfectly, allowing Dunst to embody the true essence of “red carpet glamour.”