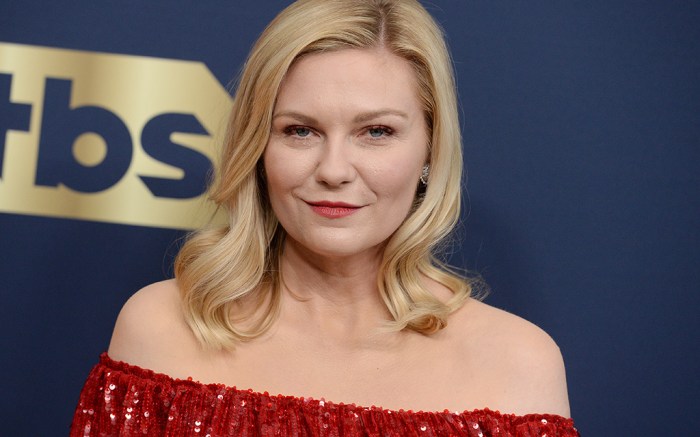 Kirsten Dunst sparkled while arriving with fiancé Jesse Plemons at the 2022 Screen Actors Guild Awards on Sunday night. For her role in the Netflix drama “The Power of the Dog,” Dunst earned an Outstanding Performance by a Female Actor in a Supporting Role nod at the awards show.

The “Spider Man” actress arrived on the red carpet in a romantic off-the-shoulder gown. Covered in red sequins, the glitzy number featured a long tiered skirt and ruffled bodice for a whimsical, enchanting touch. Dunst’s ensemble was complete with vintage platinum-set diamond earrings by Fred Leighton. Plemons was also sharply dressed in a black tuxedo with leather brogues.

When it came to footwear, the “Beguiled” star’s shoes weren’t visible beneath her gown’s long skirt. However, it’s likely Dunst opted for a pair of pointed-toe pumps or strappy sandals, two of her go-to styles for formal events. Similar styles have also been trending on the SAG Awards red carpet from brands like Christian Louboutin, Stuart Weitzman and Jimmy Choo.