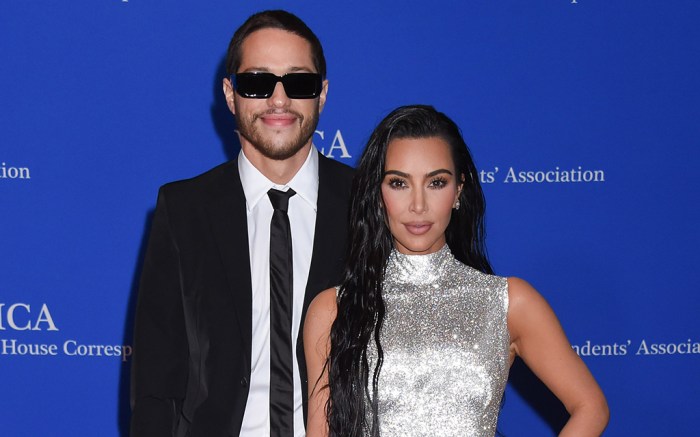 Hed: Kim Kardashian and Pete Davidson just became red carpet official — and they looked damn good doing it. The in-demand couple posed for cameras at the White House Correspondents’ Dinner on April 30, an event for recognizing media and White House journalists. For the black-tie debut, the couple dressed in their formal best, with Kardashian looking especially ethereal in a gorgeous gleaming gown.

For the event, Kardashian wore a stunning form-fitting silver Balenciaga gown crafted out of shimmering fabric. The sleeveless dress featured a conservative mock neck and a floor-sweeping skirt, which fell into a slight train. The 41-year-old reality star wore her waist-skimming dark hair in a wavy wet-look style, accessorizing with statement Lorraine Schwartz diamond stud earrings. For makeup, Kardashian wore her usual nude glam, favoring wispy lashes and a neutral lip. Kardashians’ shoes weren’t visible due to the elegant spill of her gown’s hem, but the star likely went with a stiletto heel given her height compared to Davidson.

This is the first time the media-focused event has been held in two years due to COVID-19 concerns. The famous couple was invited to the event by Disney and ABC, which has a table at the event. Notably, Kardashian’s new reality show “The Kardashians” is on Disney-owned Hulu. This appearance marks the third time Kardashian has attended the White House Correspondents’ Dinner. She also attended the event in 2010 and 2012 during President Obama’s time in office.

See more of Kardashian’s style through the years.