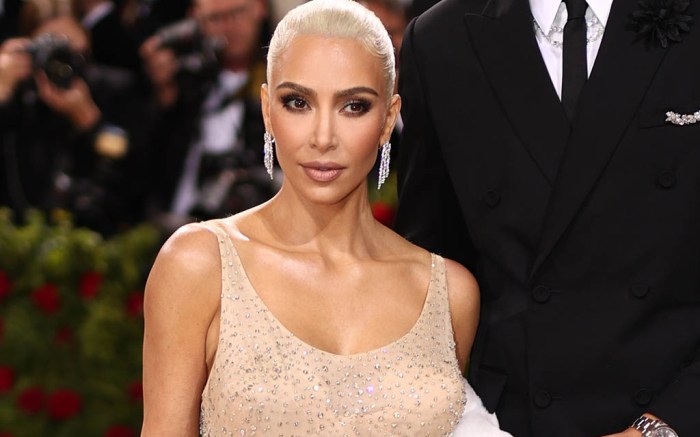 No one can forget when Marilyn Monroe sang “Happy Birthday” to John F. Kennedy in 1962 for the president’s 45 birthday. Crooning in her sultry singing voice, the iconic movie star wore a nude sleeveless crystal-covered dress crafted of sheer fabric that dipped low in the back, which was scandalous for the time. Now, some 60 years later, none other than Kim Kardashian has broken the dress out of its temperature-controlled environment to give it a spin at the 2022 Met Gala.

With her boyfriend Pete Davidson on her arm, the 41-year-old stepped out to fashion’s biggest night wearing one of America’s most famous garments courtesy of Ripley’s Believe It Or Not Museum. The dress was loaned to the star by the museum on the condition that it wasn’t altered. It was last sold for $4.8 million in 2016, making it the most expensive dress ever sold at auction.

Like Monroe wore during her iconic performance, Kardashian accessorized the dress with a white fur shawl. And the comparisons don’t end there. Kardashian bleached her actual hair blond the day before the Met Gala, committing to the bombshell-inspired look. The reality TV star wore dangling three-strand diamond earrings as her only jewelry-based accent, wearing her new blond locks pulled back into a sleek top knot to display them. For makeup, Kardashian wore a rich smoky eye with a matte nude lip.

Kardashian won’t actually be wearing the dress the entire night. After ascending up the stairs in the gown, the star changed into a replica dress also owned by Ripley’s.