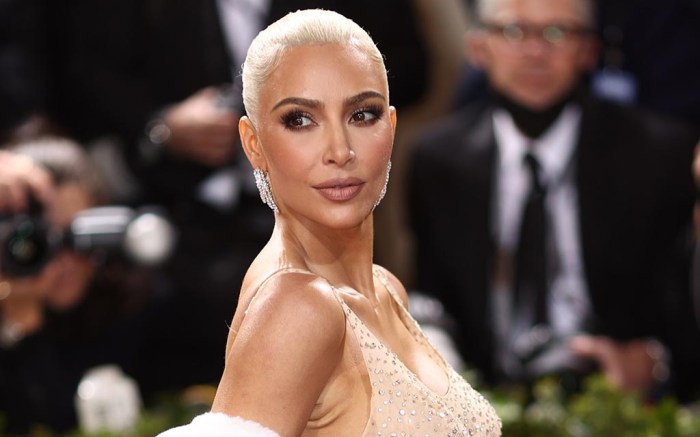 When wearing a naked dress — in fact, Marilyn Monroe’s sparkly plunging Jean-Louis number, worn to sing “Happy Birthday” to President John F. Kennedy in 1962  — what shoes do you choose? If you’re Kim Kardashian, who wore the dress at the Met Gala earlier this week, you also wear naked heels.

The “Kardashians” star’s shoes of choice hailed from Pleaser, now renowned for making sky-high heels that have been worn by the likes of Lady Gaga, Julia Fox, Helen Mirren and numerous nightlife performers. Her style, the brand’s Adore-701, featured staggering 7-inch clear stiletto heels. Completing the $50 set were thick platform soles and wide toe straps, all featuring a glossy clear texture. The shoes’ invisible nature made them a perfect pairing with Monroe’s dress, which was similarly “invisible” from its sheer texture and simple silhouette — given a boost of glamour from a sprinkling of thousands of crystals.

“The idea really came to me after the Gala in September last year. I thought to myself, ‘what would I have done for the American theme if it had not been the Balenciaga look? What’s the most American thing you can think of?’ And that’s Marilyn Monroe,” Kardashian told Vogue of the moment.

The now-viral look also required elaborate planning, including a strict diet to fit into the dress, a secret fitting at the Museum and several replicas — since Kardashian only wore the actual dress on the steps of the Met that evening. In fact, she’s only the second person known to ever wear the dress, aside from Monroe herself.

Kardashian’s daring footwear, however, drew a torrent of comment from the Internet. Originally fully covered by her gown’s skirt, the pair peeked beneath its hem when Kardashian ascended the Met steps with boyfriend Pete Davidson. Upon being visible after the Gala, numerous people began to criticize the star’s choice in white furry shrug and Pleaser heels — like nightlife performer Amanda Lepore, whose Instagram post of the dress addressed Kardashian’s shoes of choice.

“Such a sacred delicate piece of glamour girl herstory, and she wore a PLEASER?!,” Lepore exclaimed in the caption.

It’s worth noting that Monroe herself embraced lucite platform heels during her time, a style considered as a predecessor to today’s “stripper shoe.”

However, Kardashian’s heels served a higher purpose — literally. The star’s Pleasers, according to stylist Mel Ottenberg for Interview, fit the bill due to their ability to match Kardashian’s height to Monroe’s — all while not taking attention away from the dress during the “In America”-themed event.

“Marilyn Monroe was five six and Kim is five three and they couldn’t alter the dress, so she needed the height of Pleasers,” Ottenberg says for Interview. “But if you had fancy gold platforms or got a pair of Pleasers covered in gold leather at Pasquale Shoe Repair on San Vicente, it might end up being all about the shoes. It’s better in clear plastic because it’s sort of like walking on air.”

Discover Kardashian and more stars at the 2022 Met Gala in the gallery.