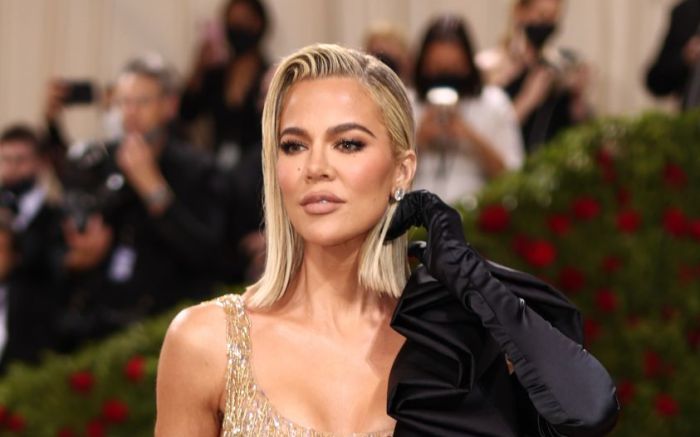 It’s hard to believe Khloe Kardashian has gone all these years without gracing the Met Gala red carpet, not extended an invitation like her sisters. But Kardashian got that previously-illusive red carpet spot this year, finally attending the first Monday in May festivities tonight in New York. And for her long-awaited debut, the Kardashian sister chose to wear an elegant Moschino ensemble you won’t soon forget.

The 37-year-old reality star arrived at the famed event dressed in a golden fitted beaded gown with bold black accents. The sheer Moschino gown featured a rounded neck and tank-like straps, one of which was embellished with a large swathe of cascading black fabric. Kardashian wrapped the fabric accent around her body like a shawl, adding to the elegance of the look. To match the statement obsidian detail, Kardashian wore black opera-length gloves.

With her shoulder-length bleached blond hair in a slicked-back style, the reality star wore large diamond earrings as the only jewelry to accompany her look. Kardashian was often seen in mirrored gold frameless sunglasses, though the star did take them off to show photographers a peek at her glam. In true Kardashian style, the star wore a simple smoky eye with blushed cheeks and a matte nude pout.

See what Nicki Minaj wore at the 2022 Met Gala.