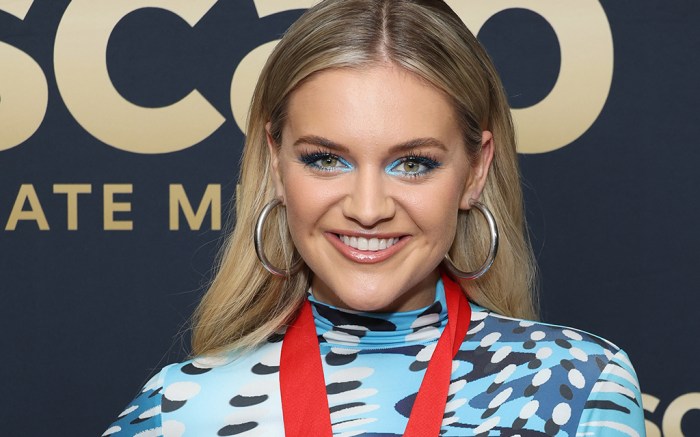 Kelsea Ballerini was honored at the 2022 ASCAP Country Music Awards reception yesterday. The event, which took place at Soho House in Nashville, Tenn. saw Ballerini clad in a graphic dress with vibrant footwear. The young star won an award for her song “Half of My Hometown,” feat Kenny Chesney.

Ballerini wore a blue long-sleeve turtleneck dress that featured a swirling black and white pattern. The garment was designed with an asymmetrical hem and was paired with statement-making silver rings and large matching hoops.

The “Peter Pan” singer popped on sky-blue knee0high boots that were reminiscent of a classic ’70s style. The shoes were a tubular shape with a steady, pointed-toe heel and an embossed crocodile print.

Popularized in the go-go era, knee-high boots leave the wearer’s knee exposed, but cover up the calves. Often worn with skirts, the style is a wise choice in fall and winter for protecting the leg from the elements while still allowing the wearer to show some leg.

The 2022 ASCAP Country Music Awards reception celebrated the writers and publishers of country music’s biggest songs of the year. Ashley Gorley extended his winning streak with a ninth Songwriter of the Year honor, and Warner Chappell Music took Publisher of the Year for the ninth time as well. Corey Crowder earned a Song of the Year for “Famous Friends,” his hit for Chris Young & Kane Brown.