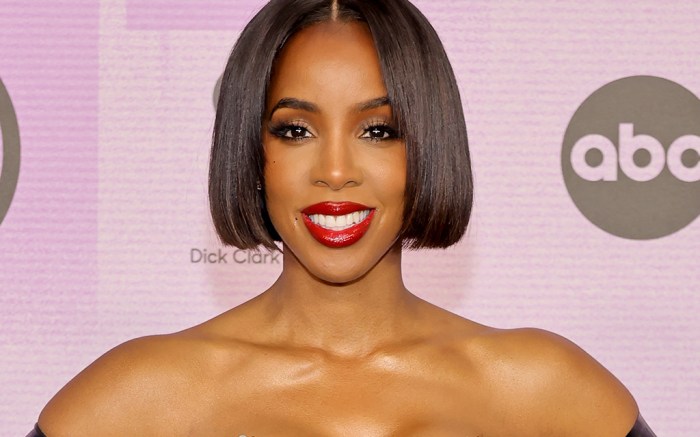 Kelly Rowland made a fierce appearance on the red carpet at the 2022 American Music Awards in Los Angeles tonight. The former Destiny’s Child member wore an animal print dress by Nicolas Jebran and footwear to match.

Walking on the wild side, Rowland’s gown was a strapless style made of an eye-catching yellow and black leopard print fabric. The style featured a sweetheart neckline that transitioned into a sculpted cascading skirt with a thigh-high slit that spotlighted the “Say My Name” songstress’ shoes.

The former “The Voice” judge amplified her look with black latex gloves and styled her hair in a short chic bob parted down the middle.

As for her footwear, Rowland opted for black Valentino pumps for her red-carpet footwear. The glossy sleek shoes were fitted with sharp stiletto-style heels, about 3 to 4 inches in height. The shoes also included singular silver studs on the toes, adding a bit of edge to the “Brown Eyes” singer’s look.