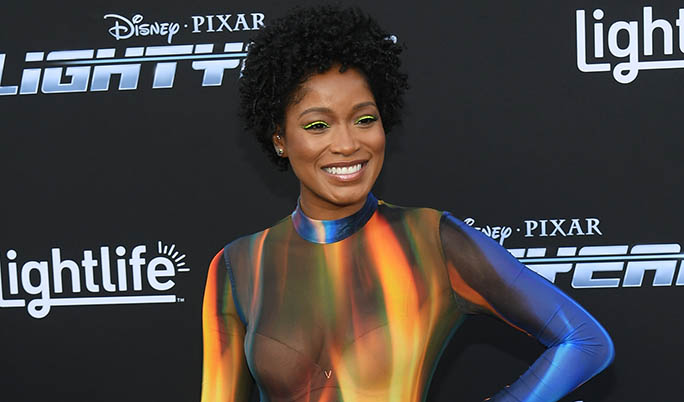 Keke Palmer burst in color at the Los Angeles premiere of “Lightyear” held at the El Captain Theatre on Wednesday night. The 28-year-old actress plays Izzy Hawthorne in the “Toy Story” spinoff, which follows Buzz Lightyear as he embarks on an intergalactic adventure with a group of ambitious recruits and his robot companion.

Palmer pulled out a show-stopping ensemble for the star-studded premiere. The “True Jackson, VP” alum stepped onto the scene in a multicolored mesh top. To turn up the glam factor, she tucked the long-sleeve mock neck top into a blue sequin skirt.

She let her curly fro flourish and opted for minimal accessories, only adding stud earrings and a ring. The star rounded out her outfit with lime green eyeshadow, which happened to match her heels perfectly. Palmer gave her look a bold touch with neon green lace up heels. The eye-catching shoe style featured accentuated around the toe and sat atop a small curved heel.

Palmer is never afraid to take risks when it comes to fashion. She is known for having a trendy, yet daring fashion aesthetic. On the footwear front, she opts for a variety of silhouettes in the form of sneakers, sleek pumps, breezy sandals, easy mules and fun boots.