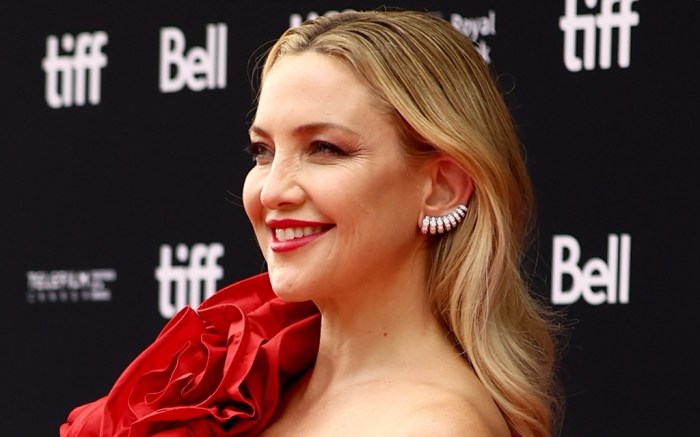 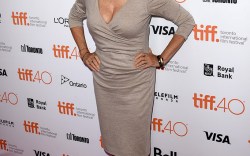 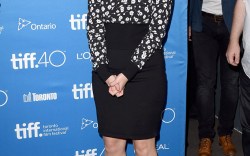 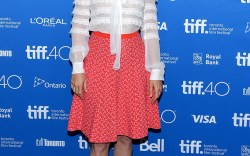 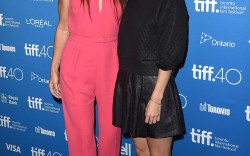 Kate Hudson stepped out in bold style for the 2022 Toronto Film Festival for the premiere of “Glass Onion: A Knives Out Story.” The film, a sequel to the 2019 mystery film “Knives Out,” stars Hudson, Daniel Craig, Madelyn Cline, Janelle Monae and Kathryn Hahn, and arrives to Netflix on December 23.

Arriving at the film’s premiere, Hudson posed on the red carpet in a deep scarlet gown. The “Nine” star’s strapless number featured a voluminous floral embellishment, appearing to blossom directly from the dress itself. The bold piece was complete with a floor-length skirt with a back slit. Hudson’s look was complete with layered diamond earrings, as well as thin rings and a red crystal-covered clutch.

When it came to shoes, Hudson went sky-high in a set of towering platform sandals. The “Something Borrowed” actress‘ satin Valentino style — in the same red hue as her dress — featured thick platform soles with ankle and slingback straps topped with a gold pyramid Rockstud. Finishing the peep-toe set were chunky block heels totaling at least 4 inches in height, adding a whimsical yet elegant finish to her outfit.