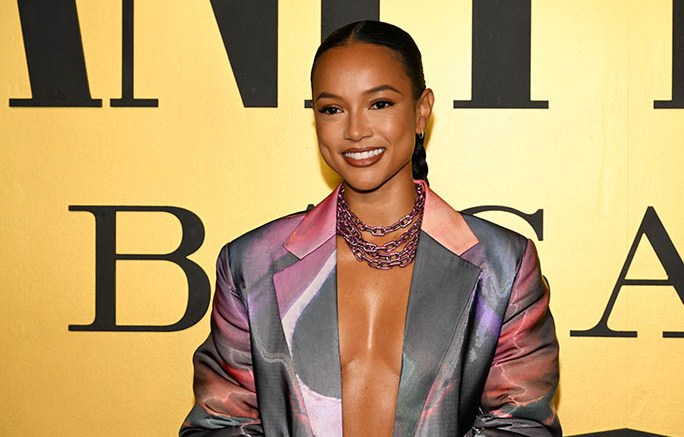 Karrueche Tran put her own twist on the power suit trend. The Emmy Award-winning actress claimed her spotlight as she attended Vanity Fair and Bacardi’s first-ever Vanities Party: A Night for Young Hollywood held at Musso & Frank Grill in Los Angeles on Tuesday.

Tran pulled out an eye-catching ensemble for the event. The “Bel-Air” star opted for a multicolored suit that prompted major spring vibes as it was filled with pastel pink hues and purple shades.

Her outfit consisted of an oversized double breasted blazer. The sharp suit jacket was complete with sleek lapels, structured shoulders and ruched padded sleeves. She updated the signature style staple by deciding to go braless underneath her outwear. Tran completed her look with matching high-waist trousers. The pants had a thick gray waistband and a wide-leg.

She rounded things off with a long braided ponytail, layered purple chain necklaces and a square silver clutch for a polished finished. The length of her pants allowed for a peak of her footwear, which appeared to be a gold metallic platform silhouette. Sky-high heels have been making a comeback. Styles with platform soles, often paired with block and stiletto heels, are favored for their supportive ankle straps and comfort compared to thinner-soled styles.

The Vanities Party: A Night For Young Hollywood is hosted by Vanity Fair to celebrate rising stars in Hollywood. This year’s event, held at Musso and Frank Grill in Los Angeles, featured a star-studded guest list including Olivia Culpo, Karrueche Tran and Madison Beer, among others. The event comes ahead of the publication’s annual Academy Awards afterparty, which attracts numerous stars. The Oscars themselves, which celebrate the top talents in film, will be held at the Dolby Theater in Los Angeles and hosted by Amy Schumer, Regina Hall and Wanda Sykes.