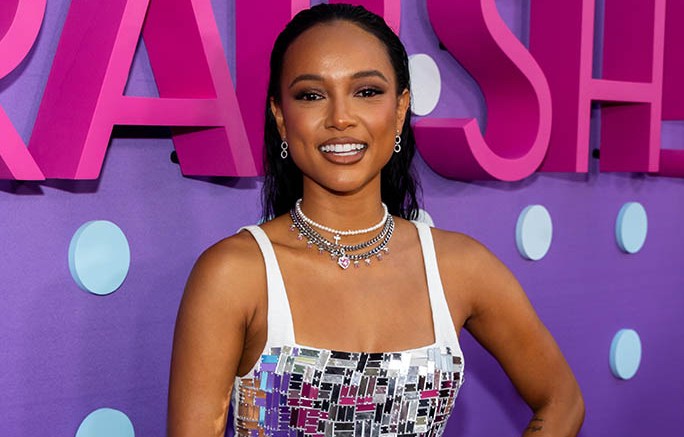 Karrueche Tran brought 90s vibes to the premiere of “Rap Sh!t” held at the Hammer Museum in Los Angeles on Wednesday. Issa Rae created the HBO Max comedy series, which follows two friends from Miami as they reunite to form a rap group.

Tran made a sparkling arrival on the hot pink carpet. The two-time Emmy Award-winning actress wore a silver sequin mini dress that featured thick straps and white fabric at the back.

Tran continued to add eye-catching elements to her look with fishnet stockings and a bevy of jewels including dainty earrings, layered choker necklaces and midi rings. She carried her essential items in a small metallic clutch and brushed her hair back away from her face.

When it came down to footwear, the “Claws” star boosted her height with black platform boots. The leather silhouette ran up to her calves, featured a chunky square outsole and were set on a stacked block heel. Post-pandemic, platform boots have emerged as one of the most popular footwear styles. The dramatic heel easily adds flair to any outfit.

Tran is known for having a chic and colorful sartorial sense. She has secured her spot as a bonafide style star by stepping out in edgy statement pieces, bold separates and printed activewear. The 34-year-old entertainer has a shoe wardrobe that consists of strappy and platform sandals from brands like Giuseppe Zanotti, Versace and Tom Ford. While off-duty, you will likely catch her in athletic sneakers by Nike and Yeezy, as well as low-top Puma sneakers.

Elevate your ensemble with a pair of platform boots.