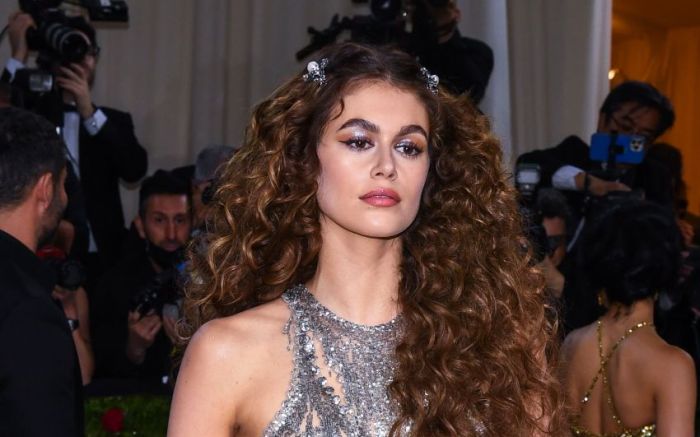 Kaia Gerber glittered when she arrived on the red carpet tonight at 2022 Met Gala.

Held at the Metropolitan Museum of Art in NYC, this year’s theme is “In America: An Anthology of Fashion.”

Gerber, who is the daughter of supermodel Cindy Crawford, attended the gala with her boyfriend, actor Austin Butler, who wore a black Prada suit to the gala. The two posed for photos and complemented each other in chic style.

Gerber’s ethereal dress is by Alexander McQueen and features a translucent skirt and bodice. The entire gown is embellished with champagne-colored sequins and adorned with dangling sequin paillettes that fall into the cutouts at the waist.

Gerber paired the dress with sandals that were an absolute perfect match. They feature toe and ankle straps in the shimmery champagne color, as well as pointed toes that square off at the tip. Their barely-there style was the perfect choice for her gown.

Her hair was down to her waist in perm-style curls. She displayed her middle part by pulling her locks back with sparkling berets that had pearls at the center. Gerber wore a cat eye makeup look and a lip color that was slightly darker than nude. She also accented the look with black manicure and natural pedicure.